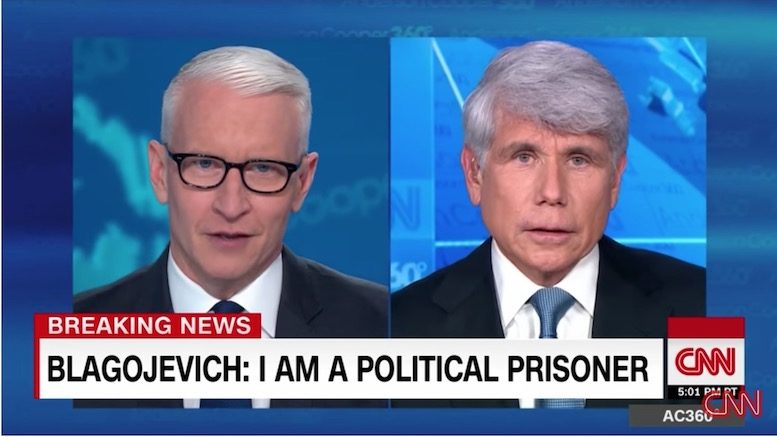 In a non-shocking development, on March 3 the Illinois Attorney Registration and Disciplinary Commission recommended that Rod R. Blagojevich be disbarred as a result of the many crimes he committed while he was that state’s governor. The recommendation still must be approved by the Illinois Supreme Court.

There is little doubt here at Lowering the Bar headquarters, at least, that it will be.

Blagojevich has appeared here at least a dozen times already, mostly during his pre-jail heyday (see, e.g., “No Waiting for Dubious Arguments at the Blagojevich Trial” (June 8, 2010)) but as recently as May 1, 2018, when I noted that the U.S. Supreme Court had denied his petition for certiorari. (This is why the ARDC is just now getting around to this—state law requires it to wait until all appeals are concluded before starting proceedings based on a conviction.) As I said then, the denial meant that “barring a presidential pardon, which is entirely possible, Blagojevich won’t be released until 2024.” It was a commutation, not a full pardon, but that’s still not a bad prediction.

Arguably, 12 appearances on Lowering the Bar should be grounds for disbarment in and of itself, but that would put too much power in the hands of an unelected me. It’s still a little disappointing that the Illinois ARDC did not mention even one of those in its report, choosing to rely instead on the evidence of Blagojevich’s conviction on 18 counts of wire fraud, corrupt solicitation, attempted extortion, conspiracy, and lying to the FBI, but whatever. The ARDC opined that these convictions were evidence of serious misconduct:

As a former Assistant State’s Attorney and elected official, [Blagojevich] was well aware of his obligation to uphold the law, and, as governor, he took an oath to faithfully discharge the duties of the office of governor to the best of his ability. Instead of doing so, he sought to further his own interests by engaging in a pattern of dishonest and deceptive conduct.

This is the sort of thing that Americans absolutely will not tolerate unless the person doing it is the president, and so it is not surprising that the ARDC recommended a strong sanction. But it also found aggravating factors existed, noting that Blagojevich has never “acknowledged that his conduct was wrongful or expressed any remorse,” and that he didn’t bother to oppose the bar’s complaint against him. To be fair, he was not allowed to relitigate the facts found by the juries that convicted him (not that he would have been successful, but it might have been entertaining), and so there wouldn’t seem much point in showing up to argue that 18 counts of wire fraud, extortion, and so forth, shouldn’t be grounds for disbarment.

Also, Blagojevich apparently does not have plans to practice law in the future, something he said he has not done since 1995 anyway. “Imagine yourself sitting on a plane and then the pilot announces before takeoff that he hasn’t flown in 25 years,” Blagojevich said in a statement issued after the recommendation. “Wouldn’t you want to get off that plane? I don’t want to hurt anybody.” Now imagine instead that the pilot hasn’t said anything, but state regulators get on the plane and announce that the pilot is a crook who has been convicted of repeatedly falsifying maintenance records and flight logs and then lying about it, and you will have a better mental picture of the situation here.

What’s next for Blago, since he won’t be practicing law in Illinois? (He has to do something, under the terms of his probation, which are still in force.) Well, as this Chicago Tribune article notes, in 2009 the state Senate unanimously barred him from holding any state office in the future, so he won’t be doing that. He could certainly run for president or Congress (he served three terms in the House before becoming governor), because as we have seen, nothing in the Constitution disqualifies a convicted felon (or unconvicted felon) from holding federal office. He could probably write another book, with help, but his first one didn’t exactly get rave reviews. Somebody might hire him as a political commentator, I suppose, although he didn’t do all that well in his CNN interview, at least if you think having the anchor call your comments “bullshit” is a bad sign. But he’ll probably find something to do.

Perhaps he will, as he suggested shortly after his release, join the fight to “try to improve what is a broken, and I believe in many cases, a corrupt criminal justice system,” a fight O.J. Simpson will surely join as soon he finds the real killers and his schedule clears up a little.