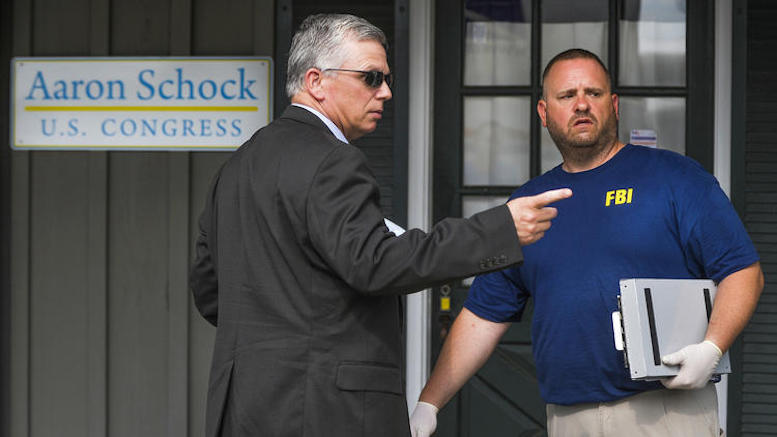 As the House of Representatives continues its struggle to break the bonds laid upon it by the tyrannous Office of Government Ethics, it seems worth remembering that, in fact, some government officers have been less than ethical over the years. Well, lots of them, actually, but some violations are more comical than others. And few have been more comical than those of ex-Rep. Aaron Schock, who was indicted in November for a hilarious streak of (allegedly!) unethical and corrupt nonsense that spanned almost his entire career in the House, according to prosecutors.

I previously found comical the antics of former Rep. William Jefferson, a Democrat (and Harvard Law grad) who served on the Ways and Means Committee and, more to the point, took bribes. Even more to the point, the FBI found $90,000 in bribe money in his freezer at home, wrapped in aluminum foil and hidden in pie-crust boxes.  See “Jefferson Convicted of Bribery, Storing Cash in Freezer” (Aug. 5, 2009); see also “Assorted Stupidity #46” (Dec. 5, 2012) (mentioning that Jefferson’s last appeal had been rejected and that his release date is sometime in 2023).

I also mentioned former Rep. Michael Grimm (R-NY), not so much because his crime (felony tax evasion) was all that funny but because he once threatened to break a reporter in half and/or throw him off a balcony in the Capitol. See “Good Reason to Kill #48: Asked Wrong Question After State of the Union” (Jan. 29, 2014). He got another mention after he insisted that despite pleading guilty to a felony he would “absolutely not” resign from the House, although he later absolutely did. See “Can a Convicted Felon Serve in Congress?” (Dec. 24, 2014) (answer: yes).

By the way, both Jefferson and Grimm were re-elected despite the pending charges, which is remarkably common and a good example of just how safe most incumbents’ seats really are. Somewhat similarly, Rep. Tom Price (R-GA) reportedly bought stock in a health-care company and then introduced a bill a week later that would have significantly helped that company. It’s somewhat similar because that hasn’t hurt his job prospects, either, at least judging by his nomination to be the next secretary of Health & Human Services.

The list goes on (*cough* Blagojevich), but it looks like most of these other politicians weren’t House members, so I’ll leave it at that for now. Because it’s time to talk about Aaron Schock.

Some remember Schock as a “precocious politician” (he was elected to the Peoria school board as a teenager, which I assume already makes you want to punch him), others as a “rising star” in national politics. But you hopefully remember him as the guy who spent $40,000 of taxpayer money to decorate his office so it looked like the set of Downton Abbey. See “FBI Investigating Ridiculous Soon-to-Be-Former Congressman” (Mar. 20, 2015). According to the November indictment, that was in no way an isolated lapse of judgment.

House members get $1 million a year to run their offices, which seems like a lot but has to cover offices in D.C. and in the member’s district, including staff salaries and so forth. The money has to be used for “ordinary and necessary expenses” of running the office, which—and this seems to confuse some members—does not include personal or campaign expenses, or furniture, or (relevant here) decorations of more than “nominal value.” Nor can campaign funds be used for personal expenses.

Schock was elected in 2008. According to the indictment, the “scheme to defraud” began “as early as 2008″—i.e., right away—and continued “to at least October 2015,” when he resigned. In addition to the Downton Abbey remodeling, I also previously mentioned Schock’s hilariously bogus mileage-reimbursement claims, in which he submitted many more miles than his cars had actually been driven. Had I known about them, I would also have mentioned the following:

Wait, one more: starting in 2011 he hosted an annual “Congressman Aaron Schock Washington DC Fly-In” event, in which constituents could fly to DC at their own expense and go to various meetings. He charged his constituents a “Fly-In Conference Fee,” and kept the leftover money for himself. He did not, of course, tell his constituents they would be paying their congressman  directly for his services in arranging this event.

Nor did he tell anyone else, like, for example, the IRS.

These allegations haven’t been proven yet, of course, and Schock pleaded not guilty in December. I should also mention that he has argued the indictment is “politically motivated” and is evidence that our “federal justice system is broken.” And “[u]nlike some politicians”—he didn’t name any names—”I did not delete any emails.” So he’s got the moral high ground, at least.

He also gets major bonus points for comparing himself to Abraham Lincoln in his resignation speech on the floor of the House. Lincoln, too, only served a short time in the House, you see. I don’t think he scalped any tickets while he was there, but it’s been a while since I read his biography.