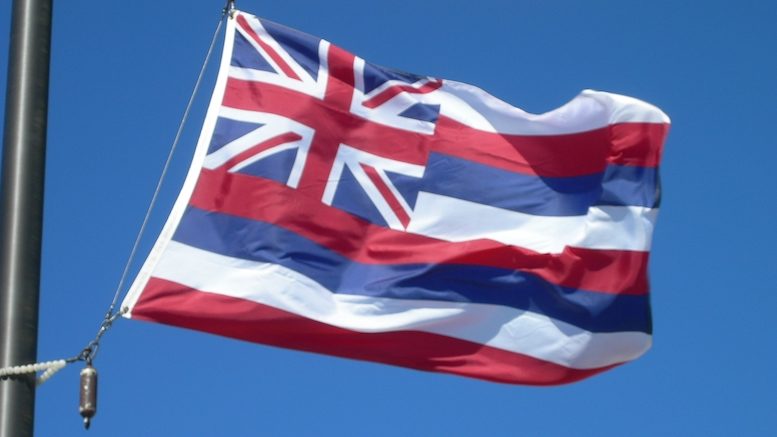 Welcome to the twelfth installment in the Official State Crap series, which I’m sure you’ve been eagerly awaiting. (Hawaii is eleventh in alphabetical order, but we did Illinois earlier for a good reason, though it turned out to be unnecessary).

First, congratulations to Hawaii’s legislature on having a website that is totally awful for looking up statutes. It’s fine in some ways, but clicking on “Browse Sections” gives you this— 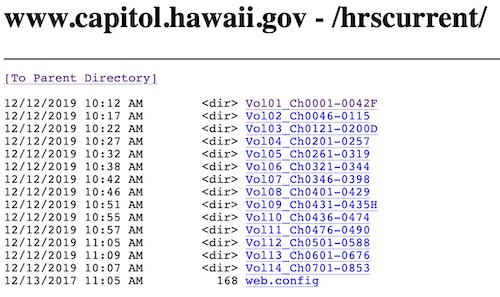 —which was probably considered user-friendly in about 1995, when I assume it appeared on the state’s GeoCities page. In any event, I eventually found Chapter 5, “Emblems and Symbols,” from which most of the following is taken.

Official state legislative website: this one, which sucks for looking up statutes.

Official state name: Hawaii. Or is it Hawaiʻi? Good question. The extra mark is an ʻokina, one of two diacritical marks in the Hawaiian language. (The other is the kahakō, but this is going to get complicated enough.) It’s a “glottal stop,” like in “uh-oh,” as in “uh-oh, I am getting into a sensitive issue here that I will probably screw up.” As with accented letters in some languages, the meaning of a word may change whether you use the ʻokina or not. That may not be the case with “Hawaiʻi,” but it seems pretty clear that the mark is required for this to be the “correct” spelling. But is it in the “official” name?

I think the answer is no, but also yes. Congress didn’t use the mark when it admitted Hawaii to the Union, the state constitution doesn’t use it, and neither does Chapter 5. It isn’t in the state seal, either. On the other hand, the governor’s website uses it consistently, and so does the University of Hawaiʻi, and Chapter 5 doesn’t say it’s not included. Another statute provides that the marks “may be used” in official documents. Hawaii Rev. Stat. § 1-13.5. So the answer seems to be that there is no “official” name, or rather that you can write it either way and be equally official.

Official state languages: English and Hawaiian, which seems consistent with the above. Initially, it was assumed English would be the official language, but many residents objected. In 1978, the state constitution was amended to state that both languages are official. Hawaii Const. art. XV, § 3; see Kaʻianoi Walk, “Officially What? The Legal Rights and Implications of ʻiŌlelo Hawaiʻi,” 30 U. Hawaii L. Rev. 243 (Winter 2007).

Official native language: Hawaiian. I’m not really sure what it means to have an “official native” language, but Hawaii has one, and guess what? It’s Hawaiian.

“Aloha Spirit” is the coordination of mind and heart within each person. It brings each person to the self. Each person must think and emote good feelings to others. In the contemplation and presence of the life force, “Aloha,” the following … may be used:

“Akahai,” meaning kindness to be expressed with tenderness;

“Lokahi,” meaning unity, to be expressed with harmony;

“Oluolu,” meaning agreeable, to be expressed with pleasantness;

“Haahaa,” meaning humility, to be expressed with modesty;

“Ahonui,” meaning patience, to be expressed with perseverance.

These are traits of character that express the charm, warmth and sincerity of Hawaii’s people…. “Aloha” is more than a word of greeting or farewell or a salutation. “Aloha” means mutual regard and affection and extends warmth in caring with no obligation in return. “Aloha” is the essence of relationships in which each person is important to every other person for collective existence. “Aloha” means to hear what is not said, to see what cannot be seen and to know the unknowable.

That’s consistent with what I thought “aloha” meant, except for that last sentence, which suggests Zen Buddhism or marijuana or both have been more influential in Hawaii than I realized.

In exercising their power…, the legislature, governor, lieutenant governor, executive officers of each department, the chief justice, associate justices, and judges of the appellate, circuit, and district courts may contemplate and reside with the life force and give consideration to the “Aloha Spirit.”

They don’t have to contemplate and reside with the life force, but should feel free to do so.

Official state motto: “Ua mau ke ea o ka aina i ka pono.” The statute says this means “The life of the land is perpetuated in righteousness,” though there seems to be some debate about that.

Official island colors: every island has its own official color as well, and if you wish to see what they are, here’s the list. The state itself does not appear to have an official color, but maybe a rainbow-like combination of the island colors would work.

Official state microbe: trick question! There isn’t one. As you know, if there was one, it would have been Flavobacterium akiainvivens, but that, sadly, did not come to pass.

“Carlos the Jackal” Still Worried About His Image

Senator is Unclear “What a Trillion Is”

Legal Tool of the Week