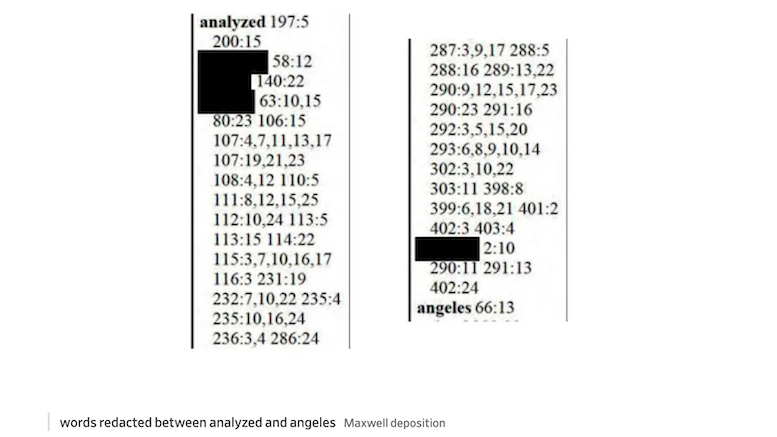 Hmmm ... what comes between "analyzed" and "angeles"?

You probably know by now, or at least you should, that if you’re trying to redact a document you need to be careful about how you do it. With PDFs, for example, just masking the text does not necessarily protect it, because it may still be possible to get the text out by a method as simple as cutting and pasting. So be careful.

Now we have learned another important lesson: if you have redacted parts of an indexed document like a deposition, you may also need to redact a significant part of that document’s index. Otherwise, it may not be too difficult to deduce what you have tried to keep secret.

On Thursday, a federal court released a deposition given in 2016 by Ghislaine Maxwell, who has been charged with helping Jeffrey Epstein do … what he did. That deposition was given in a defamation suit that has since been settled, and it was released on Thursday after “days of wrangling over redactions.” So it has a lot of redactions.

But not enough of them.

As Slate explains, if you only redact the index entry itself but not the pages on which that word appears, then someone who cared might be able to deduce what the word is. For example, if there’s a redacted word that comes right after “clients” in the index, and on the corresponding page the phrase “President _______” is redacted, it isn’t too hard to figure out that the redacted word is “Clinton.” And then you know that all the other words in that index entry are also “Clinton,” even if someone did a better job redacting those other pages.

More amusing is the example above, which involves a word that comes between “analyzed” and “angeles” in the index. And at least if you know that the name “Prince Andrew” has been mentioned in connection with the Epstein scandal, you might be able to guess that it’s his name on this page discussing an allegation regarding either Prince Andrew’s lap, or a puppet representing Prince Andrew, or maybe both:

I haven’t really followed the scandal closely enough to know what this means. I just offer it as a lesson about redacting indices.

UPDATED AGAIN: Lawyer Has Client Tasered; Says He “Had No Choice”