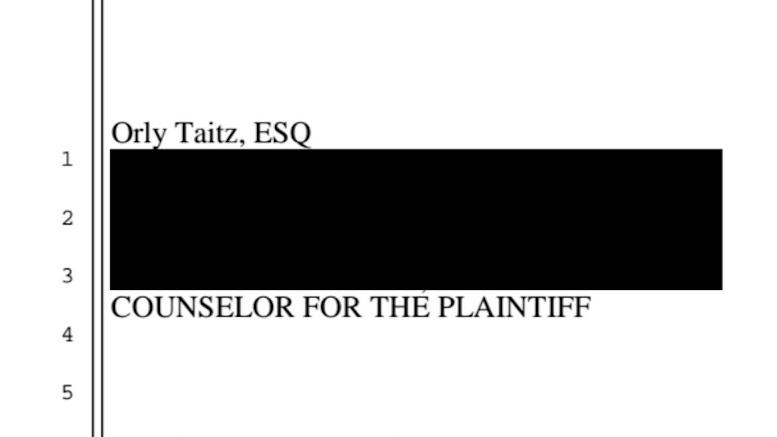 She may be an excellent dentist

Remember about a month ago, when I noted that Lin Wood, one of the hacks filing lawsuits on behalf of then-President Trump, had filed a document under “plenty of perjury”? I commented that people like Wood and Sidney Powell “are probably the Orly Taitzes of the ongoing ‘election challenges,’ but time will tell whether they are willing to fail as often and as publicly as she did.” Well, if they do plan to surpass her impressive record of failure, they’re gonna need to step it up. Because she’s not done.

If you’ve forgotten who Orly Taitz is, she is that intrepid Moldovan-American lawyer-dentist who was involved in at least dozens of lawsuits insisting Barack Obama could not be president because he was not a “natural born citizen.” Remember those? And remember how Obama served all eight years of two terms? That’s how successful those lawsuits were. Other people also filed and lost such lawsuits, but Orly’s record, and some of her arguments, were quite remarkable.

My second favorite such lawsuit is the one where she named me as a defendant (along with many others). She was never able to serve me successfully with that lawsuit, but I heard about it from one of the other defendants. See “Orly Taitz Is Trying to Sue Me, I Think” (Oct. 1, 2012).

My favorite Orly Taitz lawsuit is probably the one where she tried to sue “the Electoral College,” but it’s a close call.

Anyway, those were two of the (at least) six appearances Orly has made here. Here are the ones where she appeared in a starring role:

I don’t know what she’s been doing since then, but not studying civil procedure, that’s for sure.

Evidently not content to let Wood and Powell and Giuliani and the rest of that clown show hog the spotlight, on January 21 Taitz returned to the fray. Now claiming to represent something called the “Defend Our Freedoms Foundation ([h]ereinafter ‘DOFF’),” she filed a complaint on the foundation’s behalf against Sen. Chuck Schumer, now Senate Majority Leader, and Vice President Kamala Harris, now also President of the Senate. This pleading, entitled COMPLAINT FOR INJUNCTIVE AND DECLARATORY RELIEF TO VACATE AN UNCONSTITUTIONAL IMPEACHMENT AND REMOVAL FROM OFFICE SENATE TRIAL OF PRIVATE CITIZEN DONALD TRUMP, WHO NO LONGER HOLDS FEDERAL OFFICE,” asks the federal district court in Santa Ana to … well, to do that.

The argument she makes is one that many people are already making, and many others are opposing, namely that the Constitution does not allow an impeachment trial of a private citizen, even one who was impeached while still in office. The Constitution says this:

Judgment in Cases of Impeachment shall not extend further than to removal from Office, and disqualification to hold and enjoy any Office of honor, Trust or Profit under the United States: but the Party convicted shall nevertheless be liable and subject to Indictment, Trial, Judgment and Punishment, according to Law.

The President, Vice President and all civil Officers of the United States, shall be removed from Office on Impeachment for, and Conviction of, Treason, Bribery, or other high Crimes and Misdemeanors.

You could read that second provision to mean that what happens after a conviction is removal from office, period. And you have to be in office to be removed from it. But it doesn’t actually say removal is the only possible result. It just says if convicted, they shall be removed. And the first provision does mention another remedy: disqualification from holding another federal office. If that provision said “removal from Office or disqualification…,” the anti-Trump argument would be easier, because those would plainly be two separate options. But it says “removal from Office, and disqualification….” So Trump supporters can argue that a person can’t be disqualified unless he or she has first been convicted and removed from [o]ffice.

Could the outcome really depend on the difference between “or” and “[comma] and”? Yeah, that’s how this works sometimes.

There are a couple other arguments in favor of trying a person who has left office. First, the Senate’s done it before. Not to a president, but to a cabinet member. He wasn’t convicted, but there was a trial. So there is precedent for doing this. Second, there’s the policy argument that if only a current officeholder can be tried and convicted, then there are no consequences for trying and failing to do something outrageous near the end of the term. Something like, let’s say, encouraging a mob of armed supporters to attack the U.S. Capitol while they’re counting electoral votes. (I’m just thinking up insane examples here.) If it works, great. If not, just resign, or have Senate friends until your term is over. Why not give it a shot? That person could probably be criminally prosecuted, but not disqualified from future office, even if the Senate would otherwise vote to do just that. That seems wrong.

So there are valid arguments on both sides of this debate. Now, does Orly Taitz and/or DOFF have standing to resolve that debate in Trump’s favor by asking a judge in California to enjoin the Senate from having a trial? OF COURSE NOT. As you can see below, the complaint doesn’t even mention standing, which is something Orly really should know about by now, because she hasn’t had it many times before. In fact, this isn’t even a complaint. Complaints allege facts. This doesn’t do much more than say “this is unconstitutional,” which … is not enough.

Orly does quote article II, section 4 correctly, so she gets a point for that. She loses points, however, for choosing to center-justify the text in the complaint, which is inexplicable, and for other crimes against typography and grammar that are too numerous to mention.

If I felt like piling on, and I do, I’d mention that I checked the docket and found that Orly has already made at least three bush-league mistakes in the first week: (1) an e-filing issue, which is common; (2) failure to file a “notice of interested parties”; and (3) far more importantly, failure to serve the defendants before moving for injunctive relief (which she did on the 26th). Not improper service; no service at all. The court denied her motion for that reason, sadly without further comment. She has since fixed those mistakes, though I have a feeling her attempt to serve Schumer and the VP is not going to hold up. I am in possession of her amended motion, which I will probably turn to again after she loses. But I am absolutely going to mention, right now, the name of the one “interested party” she listed on the notice:

That’s the thing about clown cars: there’s always room for one more.

No RUI Charge for Florida Drunkard