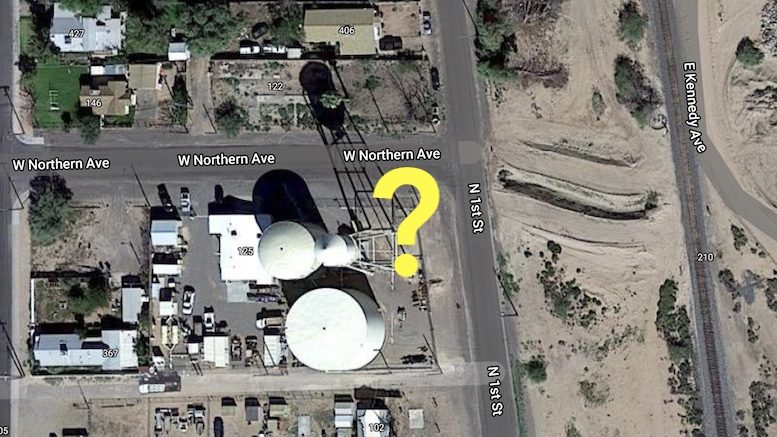 This seems to occur to people less often than other Bad Ideas like I Should Try to Escape by Water or I’ll Post Evidence of My Crime on Social Media, but it does happen.

It looks like I have specifically mentioned it only twice, once long ago (see “Man Fakes Own Kidnapping to Avoid Wrath of Girlfriend” (July 17, 2005)) and then again less long ago (see “Still Not Working: Fake Kidnapping to Avoid Wrath of Girlfriend” (Mar. 12, 2013)). Both times I evidently found it amusing enough to mention only because it was done in an effort to avoid the wrath of a girlfriend. That’s not the case here, apparently, but this still seems like something I should mention at least once every eight years.

In this case, the allegedly fake kidnapping (or fake alleged kidnapping?), was made up by an Arizona man “as an excuse to get out of work,” according to the Coolidge Examiner. On Feb. 10, police responded to reports and found a man near the Coolidge water tower “with his hands bound behind his back with a belt and a bandana stuffed in his mouth.” (At first I thought it said “banana,” and that would’ve been better for everyone, but unfortunately it says “bandana.”) It isn’t clear exactly what was reported to police or who reported it, but I have a suspicion that it was the alleged kidnappee or an accomplice. If I found somebody in that situation I’d go ahead and help them out with the belt and bandana problem, not just wait for police to come do it, but maybe that’s just me.

In any event, the man told police two masked men had kidnapped him, knocked him unconscious, and then driven him around in a vehicle (he presumably woke up at some point, which is how he knows this) before leaving him near the town water tower. As you can see above—and yes, I did spend time finding the town water tower on Google Maps, I guess because the alternatives were either going to work or trying to fake my own kidnapping—there are homes in the area. So one of those people might have seen and reported this incident (without then walking across the street to help the apparent victim). On the other hand, as Google Maps also shows, there is plenty of desert nearby where kidnappers could have dropped him off unseen, but with the now-conscious victim still easily able to reach help. I’m no kidnapper, as far as you know, but that’s what I’d have done.

For whatever reason, and I can imagine a lot of potential reasons, detectives became suspicious of the man’s claims. After investigating for several days, they “found evidence showing [his] story was fabricated” and that no kidnapping or assault had occurred. They arrested him on Feb. 17, and he reportedly has admitted that he made up the story “as an excuse to get out of work.” He has been charged with making a false report to police.

They have not yet released details, however, and so the Examiner‘s report necessarily leaves important questions unanswered, including how police were notified, what evidence the detectives found showing the story was fabricated, and what job was so terrible that the man would try to fake his own kidnapping rather than do it for another day. (Update: he apparently worked at an auto shop, which doesn’t seem that bad but I guess any job can be terrible under the right circumstances.)

Looks like it’s been a while since I provided any kidnapping-related advice at all, in fact, so I should probably recap some of that quickly as well. Kidnapping is not, for example, a great way to resolve disputes with your financial adviser or handyman; you aren’t likely to succeed in a lawsuit against someone you kidnapped, even if they did force you to watch “Patch Adams”; and kidnapping a Mormon missionary may come back to haunt you if … you know what, it’s easier if you just read that one. See “Cloned-Dog Owner Denies She Is Actually Mormon Sex Kidnapper” (Aug. 7, 2008).