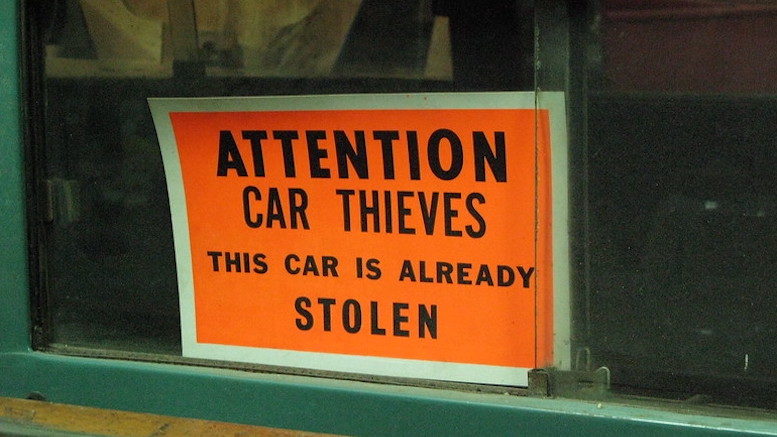 A picture that only vaguely relates to the post it accompanies (image: Andrew Huff via Flickr, CC BY-NC 2.0)

I tried for a while to improve on and/or shorten the headline of this item, but finally decided it wasn’t possible. Too many facts to squeeze in.

According to the report, police arrested a 32-year-old Chicago man in March after he was allegedly caught driving a stolen Dodge Charger. The report doesn’t say why they stopped him, but the car’s front license plate was missing, so that’s one possibility. When they checked the rear plate number, they discovered the car had been reported stolen. They arrested the man, who was charged with “misdemeanor criminal trespass to vehicle,” which I assume means they couldn’t actually prove he had stolen it. But he was sitting in it, and he didn’t have permission to do that, hence the criminal-trespass charge. He also had a suspended license, so that charge got tacked on too. A judge released him but ordered him to appear for a court hearing, via Zoom, on March 30.

To his credit, he did not miss the hearing. To his discredit, he allegedly made the Zoom call from inside another stolen car.

The report says that on March 30, police pulled up behind a BMW that had been reported stolen, although the circumstances of this stop aren’t very clear, either. When they walked up to the car, they noticed the occupant was on his phone, and then realized he was calling in for a court hearing. They seem to have let him finish that while they were checking the BMW’s registration, and after confirming the car had been reported stolen, they arrested him.

The situation had to be explained at least two times to Judge David Navarro, according to the report:

“Are you telling me that when the police approached the defendant [on Tuesday], he was in the middle of a Zoom court hearing?” a flummoxed Judge David Navarro asked an assistant state’s attorney after hearing the allegations.

“Yes, your honor. That is correct.”

This got him charged with a second count of misdemeanor criminal trespass to a vehicle, which I assume means they couldn’t actually prove he had stolen this one, either. There might be a point at which repeated appearances inside stolen vehicles could constitute circumstantial evidence that you were somehow involved in stealing said vehicles, but probably some corroborating evidence would still be needed. I mean, it could just be bad luck that this guy happened, twice, to be found in a car that wasn’t his and had been reported stolen.

That seems to be what his lawyer argued, in fact, at least with regard to the second time. As the report put it, the “public defender said there’s no evidence [his client] knew the car he was sitting in during his court hearing for a stolen car case was also stolen.” That’s certainly possible. Maybe the owner negligently left the door open, and my client tripped (on a crack in the sidewalk that the city has negligently maintained) and fell into the vehicle that, unbeknownst to him, had been stolen. He then noticed it was time for his Zoom hearing on a coincidentally similar topic, and dialed in from the car so he wouldn’t be late. Stranger things have happened, though not often.

Following the second arraignment, the man was again released (this time on bail), and again ordered to appear for a future hearing via Zoom. I will send him a dollar if he appears for that hearing from yet another different stolen car, two dollars if he tells me about it in advance so I can dial in.

For a look at how cases like this played out in the pre-Zoom era (and still do sometimes), see “Alleged Car-Stealer Charged With Stealing Car to Get to Hearing on Car-Stealing Charges” (Nov. 7, 2009). Cf. “Rapper Who Rapped About Committing Fraud Arrested for Fraud” (Oct. 19, 2020) (which is kind of similar, if you don’t think about it too much); “Juror in Stolen-Credit-Card Case Steals Fellow Juror’s Credit Card” (Mar. 29, 2010) (which only sounds similar); and “Suspect Who Asks About His ‘Other Murder Case’ Is Charged With That One, Too” (Jan. 30, 2018) (which isn’t really similar at all, but is pretty good anyway).

Judge Queries Whether Defendant Wants a Piece of Him; Is Censured

Yet Another Lawsuit About the Lack of Fruit in “Froot Loops”