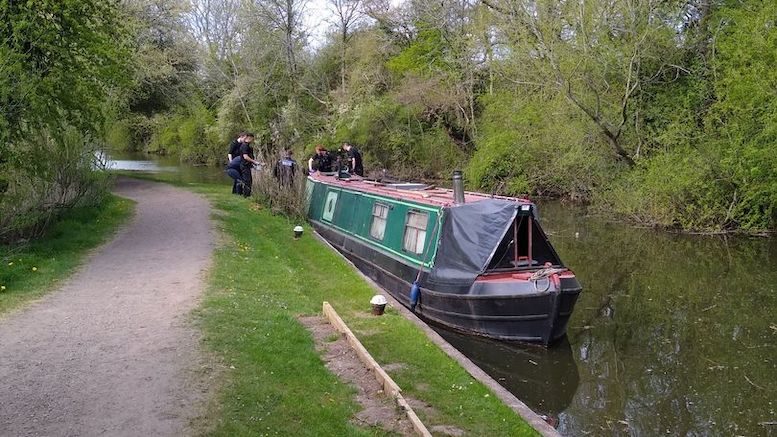 The Leicester Mercury reports that in April, police there successfully captured a man who was traveling on a “narrowboat”—like a barge, but narrower, and also British—after chasing it for eight miles along the Grand Union Canal at a speed that did not exceed four miles per hour. This means our first question is whether this qualifies as a “chase.”

To me, the word “chase” implies that the quarry knows it’s being pursued and is actively trying to flee, which may not have been the case here. It also implies a rate of speed that need not be specifically defined but is more than four miles per hour. Otherwise, the activity seems more like “hunting,” “stalking,” or “pursuing,” or maybe just “following.” And in fact one definition for “chase” in the OED is “to cause to move off or depart precipitately.” But the OED also defines it to mean “to pursue with a view to catching,” and that doesn’t depend on the mental state of the quarry or (arguably) any particular speed. So I guess you can call this a “chase” if you want to.

But you shouldn’t, because people are probably going to make fun of you if you tell them you “chased” a barge and you seem to be serious about that verb. Here, in fact, the only person even arguably doing any “chasing” at all was an officer who “patiently followed the boat on his bike,” keeping tabs on it while his colleagues drove up ahead and staked out one of the canal’s locks. Apparently these locks require someone to get off the barge in order to operate them, and when the barge thief did that, the patiently biking officer said, “the trap was sprung by my colleagues lying in wait in the undergrowth nearby.”

“I like to think it was like the boat chase in James Bond’s Live and Let Die,” read one reply to the Leicester police’s announcement of this feat on Twitter, but of course the only similarity is that there was a boat involved. The scene in that movie depicted a true “chase” (well, it was pretend, but it would have been a “chase” if real) involving several boats traveling at high speed through a bayou, and several boats jumping over things, in fact. According to the site linked above, they used 26 boats to film that scene, “17 of which were destroyed” in the process. No such excitement occurred in the Leicester case.

I should say, “the most recent Leicester case,” because this is not the only barge chase in which the local constabulary has been involved recently. For a while I was very confused by what I was finding online, until I realized that I was seeing multiple reports of two different barge-capture operations carried out by Leicester police during the last six months or so. The report linked above involved a man who had violated a restraining order on April 23 and assaulted someone. Officers received a report on April 28 that the man could be found on “his narrowboat,” which was moored along one of the waterways that flows through Leicester. By the time they arrived, the boat had departed. “Officers obtained a direction of travel for the boat,” however, and the aforementioned officer patiently cycled in that direction while others moved up ahead to lie in wait.

Even if they hadn’t obtained a direction of travel, of course, it wouldn’t have been too difficult to track down this suspect, given the limited options and mobility available to him. That’s why this is going in the Water Escapes category, as so many of you suggested it should. It’s not really clear he was trying to “escape,” but he might have been, having committed a crime and all. If he was, then seeking to escape by barge was indeed a poor choice.

The earlier and equally dramatic barge capture in that area took place in September 2020, I eventually figured out, In that case, the suspect stole the barge, which he had previously owned but had sold. He painted over the name on the barge to “conceal its identity,” before “sedately chugging away at 6am on Saturday September 5.” After what one officer accurately called a “13-mile follow” (emphasis added), also at no more than 4 mph, police stopped the barge and the suspect surrendered without incident.

In February, that suspect was sentenced after pleading guilty to stealing the barge. The man and his father had restored it together, but his father died in 2018, and then the man was furloughed from his job because of the pandemic lockdown. It sounds like he had to sell the barge as a result, and these events were understandably depressing. Stealing the barge back was not a great response to this, of course, but the judge took the circumstances into account and gave him a suspended sentence.

According to the report, the barge was called Elusive, which I think shows that at least one of its owners has a sense of humor.

A Brawl That Maybe You Should Not Find Funny, But Probably Will