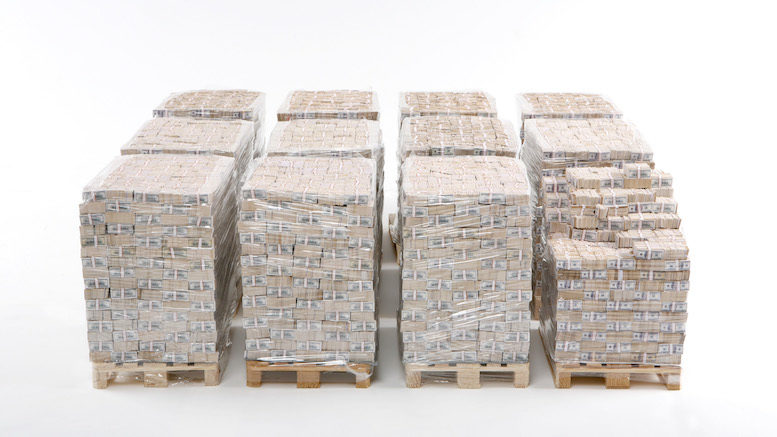 Sure, $32 trillion may seem like a lot of money, but you can’t just take that at face value.

To begin with, it depends what kind of “dollars” they are. If they were U.S. dollars, that would probably count as “a lot of money.” Even if you were Jeff Bezos, who is so rich that, according to Bloomberg, he is about to pay over half a billion U.S. dollars for a 417-foot superyacht that is so big it has to have its own 100-foot “support yacht.” (Some have speculated that the “superyacht” is itself just the support yacht for a still-undisclosed and even larger überyacht, but that would just be ridiculous).

But lots of countries use “dollars,” and the value of these “dollars” varies quite dramatically. Australian dollars, for example, are (as I am writing this) said to be worth about 78 U.S. cents each, so if the plaintiff’s demand in this case had been $32 trillion Australian, that would translate to a much more reasonable US$25 trillion or so. If he wanted $32 trillion in New Zealand dollars, that’d be the equivalent of just over US$23 trillion. If he sought 32 trillion of the pleasant tropical dollars used in Fiji, that would be about US$15.8 trillion, and so forth.

Or, if he demanded 32 trillion of Zimbabwe’s hilariously tiny dollars, that would be a mere $88 billion, an amount that Jeff Bezos could pay twice and still have enough money for a small fleet of überyachts and their various supporting vessels. Of course, if a Zimbabwean dollar is actually worth .0028 U.S. dollars now, then things have vastly improved since a few years ago, when the exchange rate was, and this is true, at least 250 trillion to one. See “ALERT: Saturday Is the Last Day to Cash in Your $100-Trillion Bills” (April 28, 2016). I have my doubts.

But in fact Tyler Chamberlin wanted $32 trillion Canadian dollars, which are currently worth a quite respectable 82 U.S. cents each. That means his demand in the lawsuit he filed against the Insurance Corporation of British Columbia was, in U.S. dollars, about 26 trillion, 426 billion, 195 million and change. Which, again, even Jeff Bezos would have to admit is “a lot of money.”

That isn’t all he wanted, though, according to reports like this one. Chamberlin—who was suing ICBC for injuries a hit-and-run driver allegedly inflicted while Chamberlin was riding his bicycle—first seems to have filed a relatively normal complaint. But he then amended it, resulting in claims that were more “wide-ranging,” as the judge put it. He added several defendants, including a hospital, the Supreme Court of British Columbia, and the prime minister and premier of Canada [Canadian-prompted correction: Canada doesn’t have a premier; this was the premier of the province of British Columbia], as well as the nominal sovereign, Queen Elizabeth II. According to the judge, Chamberlin’s demands in the amended complaint included:

a private audience with Her Majesty, the suspension of trade with China, the dismantling of Transport Canada, the postponement of an election, the release of classified documents, the “cleaning up of the swamp,” the reconstruction of the RCMP [the Mounties], an MRI of his entire body, $32 trillion, and 500,000 Tesla shares.

According to this report, the court documents did not further define the “cleaning up of the swamp” demand, either to identify the swamp he wanted cleaned or to explain how the defendant(s) should go about cleaning it. It was also not clear, for example, why Chamberlin thought the Mounties need to be “reconstructed,” or why a provincial court would have the power to order international trade suspended (much less how either of those related to his bike accident). He might have been hit by someone driving a Tesla, which might explain the demand for Tesla shares, but there’s no suggestion in the reports that if this happened it was somehow Tesla’s fault. And then, of course, there was the $32 trillion in Canadian dollars.

None of which Chamberlin will receive, as the court held in March.

This is despite the fact that the $32 trillion is by no means the most ridiculous monetary demand ever made, as you may recall. Unless I’ve somehow missed a bigger one, the record is still held by Anton Purisima, whose 2014 lawsuit named a figure that took 36 zeros to write. See “Two-Undecillion-Dollar Demand Spells Trouble for Au Bon Pain” (May 13, 2014) (noting that the figure could also be expressed as “two octillion gigadollars,” which is funnier). Chamberlin’s demand only had 14 digits in it, so relatively speaking it was quite reasonable.

I just noticed that Tesla stock is currently trading at about $600 (US) per share, so that would have added another $300 million to the demand. But then, under the circumstances, that’s really not even worth mentioning.

Probation May Be Revoked for Sharing