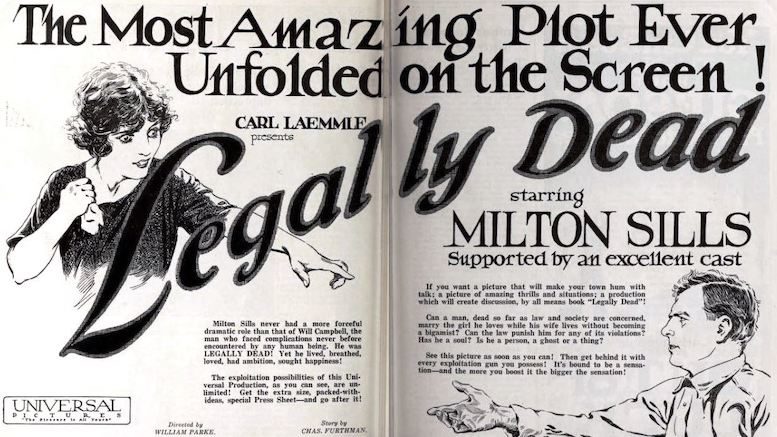 You might think all your legal problems will be over once you’re dead, but if you think that, my friend, you haven’t been paying attention.

It is true that death generally frees you from the burden of caring about such things, even if somebody later has the bad manners to dig up your corpse and put it on trial. See “Can You Sue a Dead Person?” (June 16, 2020). I mean, that is just rude. And these days, at least, death is a pretty solid defense. The drawback is that you have to actually be dead, unless you are better at faking your own death than most people who try that. You very well might be. See, e.g., “Felon Who Died in Tragic Fall Found Alive in Closet” (Aug. 24, 2020); see also Assorted Stupidities #94 & 136.

Being actually dead is a much better option, though, than being legally dead, at least in terms of the legal ramifications. If you’re only legally dead, you may lose many of your legal rights while you’re still live enough to care, and it doesn’t give you much protection, as far as I can tell. Plus, it can be very, very difficult to convince the government that you are, in fact, not dead, even if you show up in court as Exhibit A. See, e.g., “Hallucinating Romanian Story: ‘I Am a Deceased Man but Still Live’” (Mar. 22, 2018); “‘No, You’re Still Deceased,'” Judge Tells Dead Man” (Oct. 10, 2013).

This is, of course, still happening.

Last month, New Jersey resident Samantha Dreissig said she had been trying for seven years to convince the Internal Revenue Service she was alive, apparently without success. Dreissig said the mix-up began the year her mother died, although she and her mother did not share either a first or last name. “They say, nope, sorry, this account’s linked to a dead person,” Dreissig told WLNY in New York. She says another IRS representative told her, “Wow, you’re dead all over our system,” apparently just to rub it in. According to the report, the situation is causing “a tax nightmare” for her, although it didn’t say how. I assume the potential problem is that when the IRS does get its records straightened out, it will then demand many years’ worth of tax liability all at once, including the years it was telling her she was dead and not letting her pay. It’s causing problems right now for her father, the report says, because the IRS says he’s trying to “claim a deceased dependent.”

That same article linked to two similar ones from just the past two months, suggesting this happens a lot. In one of them, a Connecticut woman said that the IRS’s insistence she was dead meant she couldn’t claim two COVID stimulus checks she qualified for, and that not even the Social Security Administration could convince the IRS that she was, in fact, alive. “You are not known as deceased,” the IRS declared in its next letter to her, managing to make the whole situation even more horrific by using the passive voice.

If the IRS is worse at this than the SSA, that would really be saying something. I found many reports saying that the SSA “declares more than 12,000 people dead every year,” or words to that effect, but that’s not quite accurate. The source for it seems to be this 2011 report by the SSA’s Inspector General, which says an audit found that between May 2007 and April 2010, SSA had “removed 36,657 wage earners’ death entries” from its files. In other words, it had actually been resurrecting more than 12,000 people every year during that period, not declaring them dead. Yes, I hear you saying, it had mistakenly declared them all dead at some point, but it could be that a huge number of people were wrongly declared dead all at once, possibly in Texas due to concerns they might vote the wrong way, and the SSA has been slowly working on the backlog ever since. Regardless, we need to describe it correctly: the SSA declares more than 12,000 people undead every year.

Does this sort of thing happen in other countries? It does. As The Guardian reported last month, Jeanne Pouchain has been trying for years to convince French authorities she is alive, to no avail. She seems to have died, legally, as a result of a 20-year-old legal dispute she won on a technicality. Her current lawyer said it appears that her opponent later reopened the case without her knowledge, claiming Pouchain had died, and the tribunal had ordered her “heirs” to pay the 35,000-euro demand. This has resulted in frozen bank accounts, repossessions, and a lot of frustration. Like some of those mentioned above, Pouchain seems to be trapped in limbo (and not the fun kind): clearly not dead and yet unable to get that status officially changed.

Upon being questioned by The Guardian, the French statistics agency Insee said its records were “exhaustive,” but something may have been lost in translation there. It first told the reporter that Pouchain was indeed on the list of dead people, “but has not died.” Could they elaborate? Non:

When I question this, an Insee spokesperson replies, saying: “Sorry, we made a mistake, she’s not on the dead list.” So I ask if she is on their list of living people. “No, she is not, and sorry, alas we have no more information on this subject.”

Alas, you see, she is not dead and yet not alive; it is, how do you say, a paradox? But look at you. How bourgeois, how boring. You come to ask about this woman, is she dead, is she alive, are your records not exhaustive, but do you know why you ask? You think you do, but you do not. You are here because you were sent here, you were told to come here and you obeyed. It is, of course, the way of all things. This is the nature of the universe: not dead or alive, but cause and effect. Now, I have some real business to attend to, I will say adieu and goodbye.

Sorry—I assume that, like me, if an irritating French bureaucrat is involved your brain is going straight to that guy from the Matrix movies. That’s the accent the paragraph was written in, anyway. You should read it accordingly.

As of last month, Pouchain was still dead, despite reviews of her situation by courts up to and including France’s supremest, the Cour de cassation. Her local MP has spoken to the justice minister, so maybe that will shake something loose. She was, at least, finally able to get a COVID vaccination despite her official status, according to the report. Which, astoundingly, millions of people with allegedly living brains still have not done.

It’s Not Your Fault You Microwaved the Cat

TIP: He’s Probably Not Going to Show Your Snake to His Girlfriend