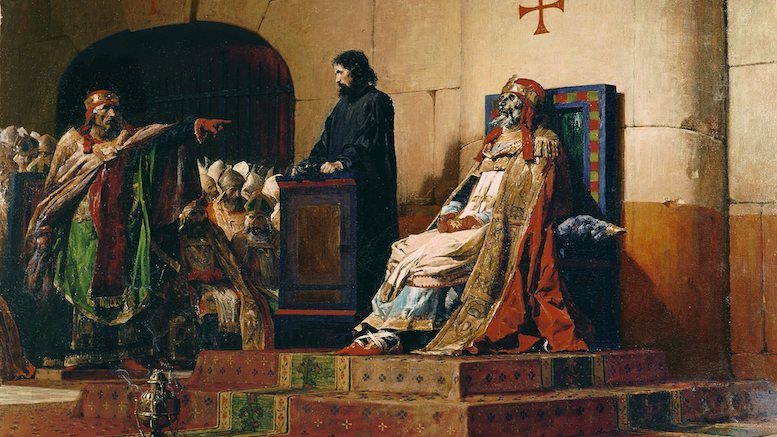 Turns out the answer is no.

You can sue whoever you want, of course, so we are really talking about whether there’s a chance of success. The answer is no, because the dead person no longer exists as a legal entity. Whether he or she exists as some other kind of entity is not an issue the legal system is equipped to deal with, as we’ve seen before. See, e.g. Chambers v. God, No. 1075-462 (Douglas Cty. (Nebraska) Dist. Ct. Oct. 8, 2008) (dismissing case for inability to serve Defendant with process); U. S. ex rel. Mayo v. Satan & his Staff, 54 F.R.D. 282, 283 (W.D. Pa. 1971) (dismissing for lack of personal jurisdiction).

As the Ninth Circuit pointed out recently, “[t]here are a number of ways to accomplish litigation regarding interests once held by a dead person.” LN Mgmt. LLC v. JP Morgan Chase Bank, 957 F.3d 943 (9th Cir. Apr. 24, 2020). You can sue the person’s “estate,” a legal entity created for the purpose and represented by a living person, or in some cases you can sue the dead person’s successors. But “[r]arely do we see efforts to actually engage the dead in litigation.”

“This case turns on such a question,” the court said, “which is of first impression in this circuit: can you sue a dead person?” While the answer may seem obvious—and turns out to be—the court’s research showed that at least three other circuits and several district courts have had to address it.

The dead-litigant problem may arise (no pun intended) for several reasons. For example, a plaintiff may not know the defendant is dead. That suggests a certain failure of research, but okay, it happens. More amusingly, a lawyer may not know his or her client is dead. This might arise if, for example, the lawyer purports to have thousands of clients and just sort of lost track of which ones were alive. See, e.g., In re Engle Cases, No. 3:09-cv-10000, 2013 WL 8115442 (M.D. Fla. Jan. 22, 2013) (noting that 521 of the “would-be plaintiffs” turned out to have died before the action was filed).

LN Management was an example of the first kind. Under Nevada law, a homeowners’ association can foreclose on a property if someone hasn’t paid their dues, and this has caused problems when a bank also wants to foreclose. A Las Vegas homeowner stopped paying her HOA dues in 2009, for the understandable reason that she had died. The HOA foreclosed and resold the property to LN Management. But there was a mortgage, so LN filed a quiet-title action in state court against the bank (fine) and the dead woman (questionable). The bank removed to federal court on the grounds that the only in-state defendant was dead and therefore “fraudulently joined.” Okay, well, you might have a point, said LN, and tried to substitute “the estate” for the dead woman.

In doing this, it filed something that’s bizarrely called a “Suggestion of Death,” although it wasn’t just a suggestion because the death certificate was attached. Maybe this term harks back to a time when records were less complete, and you’d just “suggest” a person was dead and see if they showed up to argue otherwise. As I mentioned a while back, in Illinois the same thing is called a “Motion to Spread Death,” and it’d be a little alarming to see that in your inbox but that’s what it’s called.

Anyway, the problem for LN was that there was no estate, or at least no one had filed a probate action. LN said it had “located at least one person … who claims to be the daughter of the decedent.” Okay, but even if she really was the daughter, she didn’t file a probate action, and LN never asked the court to appoint her or anyone else to represent the “estate.” And an estate, “like [a] memory,” is “an abstract concept that cannot be sued except through a legal representative….” (You can’t represent a memory, but it’s a nice metaphor.) And the person you sued is dead, so she’s not a party. Federal diversity jurisdiction thus existed, and (for even more boring reasons) the court dismissed.

On appeal, the Ninth Circuit noted that it was pretty clear LN should lose on the merits, but LN still insisted there had never been federal jurisdiction in the first place, so the state courts should have handled it. And that depended on the answer to the question: can you sue a dead person?

The Ninth Circuit had never been required to decide this, it noted, but the Fourth, Fifth, and Tenth Circuits had. There are other cases in which the answer (no) has been taken for granted, but these courts felt compelled to explain. And at least in federal court, the explanation is that without a plaintiff (or defendant) who actually exists, there is no “case or controversy” as Article III of the Constitution requires. The issue is usually whether a plaintiff has Article III “standing,” but similar problems prevent suing the deceased: “The core observation is that the dead lack the capacities that litigants must have to allow for a true Article III case or controversy. We find this obvious, but sometimes stating the obvious is necessary.”

“In addition,” the court continued, “there are sound logical reasons not to allow suits against the dead.” It’s unfair to the dead, for one thing, but the court confessed it was more concerned about the living. For example, if a plaintiff could sue a dead person directly, any living people who might have an interest in the outcome would be less likely to get notice. “We are confident that allowing proceedings against the dead,” that is, would “threaten to deprive the living of due process.”

The court also mentioned in a footnote the issue of prosecuting the dead, which has similarly also been seen as unfair. The most (in)famous example is the trial of Pope Formosus—well, ex-Pope Formosus—in January 897, which seems to have been a thoroughly unpleasant affair for everyone involved. See Donald E. Wilkes, Jr., “The Cadaver Synod: Strangest Trial in History,” Flagpole Magazine (Oct. 31, 2001). Especially so for the poor guy they appointed to represent the defendant. Who lost, but was later vindicated, not that he cared either way.

I will say it was thoughtful that they realized the need to appoint defense counsel—I guess for the sake of appearances?—but he didn’t really have a chance to consult with his client.