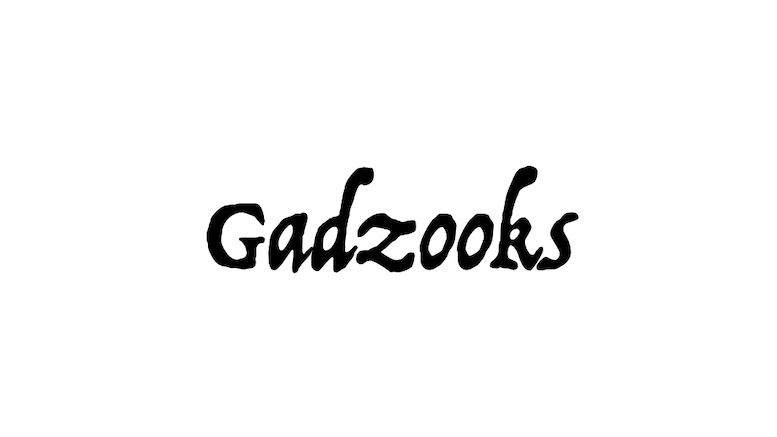 Thank you to the reader who recently alerted me to this important opinion:

It’s not just important, it appears to be unique.

A search for “gadzooks” on Westlaw turned up 30 opinions by U.S. courts in which that word appears. But other than Campasano, all these opinions were either referring to Gadzooks, Inc., a shoe retailer that was involved in litigation before (and after) it declared bankruptcy in 2005, or citing one of the earlier cases involving it. (Westlaw also retrieved another five opinions that did not contain the word “gadzooks” itself but which it believed were “probably relevant to [my] search,” and that’s a good feature but it’s a little disappointing that Westlaw doesn’t know me better by now.) To the best of my knowledge, therefore, Campasano is the only reported U.S. decision in which a court has considered the use of the word “gadzooks.”

Lawyers in other countries (English-speaking or otherwise) are encouraged to search their databases as well for this important information. Including those practicing in India if you can tell me what you found in fewer than 50,000 words. See, e.g., “Luxuriate in the Octopoid Embrace of These Legal Postulations” (Feb. 15, 2017).

So what is “gadzooks,” anyway? Well, it’s not, as people who refuse to get vaccinated may believe, the plural of “gadzook.” The Oxford English Dictionary defines it as an “interjection” used as “a mild oath to express surprise, alarm, etc., or to affirm the truth of a statement.” The OED cites examples dating back to 1652, though the spelling in that example is “cadzooks.” But it also mentions a huge number of apparently related terms, including but not limited to “adzooks,” “adsooks,” “adzucks,” “gadzookers,” “gadswookars,” “godzooks,” “godsookers,” “godsokers,” “goodsookers,” “zooks,” “zookers,” “zoodikers,” and many others. Wherever “gadzooks” originally was in this evolutionary tree, it seems to have become the dominant form.

Where did all this come from to begin with? No one knows, but there are theories. One of them, which the court mentions in Campasano, is that “gadzooks” is “a contraction of ‘God’s hooks’ and refers to the nails used in the crucifixion of Jesus.” Uh, what? I’d bet a lot of denarii that this is wrong.

The only source the court cites is Wiktionary, and Wiktionary cites no sources at all. The same theory shows up elsewhere on the internet, but then so does lots of other stuff. So far as I can tell, there is no actual evidence to support it. Also common is the theory that “Gad” is a word people would use so they could swear without taking the Lord’s name in vain. I guess that’s plausible, at least if you think changing one letter would be enough to get Him to overlook it. But the second part of “gadzooks” is the real mystery. The OED does say “hook” might “perhaps” be involved, but does not even hint at the Crucifixion. Also, there’s a very long entry on the word “god,” including dozens of examples of oaths that include it. But while it lists everything from “God’s arms!” to “God’s wounds!” (which I guess is a possibility), there’s nothing even close to the hook story.

I am very doubtful.

Whatever the explanation might be, the OED points out that all these terms are now “archaic” and chiefly used for “comic effect.” More importantly here, they are “oaths [used] to express surprise and alarm.” This means a lawyer should avoid saying any of them in court immediately after a judge issues a ruling.

That’s what happened in Campasano. The trial wasn’t going well for the plaintiff. Or at least for his lawyer, who was plainly getting frustrated. The judge was ruling that many of his questions were irrelevant, and he did not agree. He became argumentative, and at least four of the pages in this opinion are quotes from the transcript showing the lawyer and the judge arguing with each other. After about three pages’ worth of this, the following happened:

THE COURT: All right. I’m going to allow the testimony. Go ahead, Mr. Koster.

THE COURT: We’re going to take a five-minute recess.

(Whereupon, a short recess was taken.)

Here’s a tip: if you’ve been doing something in court, and it makes the judge so mad she has to take a five-minute recess to cool off, you should stop doing that thing. I’ve actually seen this happen. Luckily, it was the other side’s lawyer. I think that was actually a ten-minute recess, in fact. And no, he didn’t stop.

This lawyer apparently didn’t, either. The court reporter didn’t catch the second gadzooks, but we can infer it from the transcrip:

[MR. THOLLANDER, under his breath: Gadzooks.]

THE COURT: Mr. Thollander, if you make one more comment under your breath—

THE COURT: Mr. Thollander, if you make one more comment that’s offensive to this Court, I will hold you in contempt of court.

MR. THOLLANDER: Gadzooks is offensive to the Court?

THE COURT: You are now in contempt of court. I’m fining you $1,000. Ask another question, Mr. Besetzny.

MR. THOLLANDER: May I ask the Court—

Thollander appealed the contempt finding, arguing essentially that four “gadzooks” didn’t rise to the necessary level. The court of appeal did not agree:

No matter how frustrated a lawyer becomes with a court’s rulings and comments, it is nonproductive and obstructive to disobey the court when the court refuses to allow an attorney to make statements on the record…. It is equally nonproductive and obstructive to use any rude or disrespectful words or gestures when a person disagrees with the trial court’s rulings…. Thollander knew or should have known that the use of the word “gadzooks” was offensive and disrespectful to the court, and admittedly, he made the comment in deep frustration from the court’s rulings and comments in this case. [But instead] of attempting to educate the judge as to his trial strategy, he argued and fought with the judge, attempting to embarrass, hinder, and obstruct the court in its decision-making process. When the trial court took a recess, after the first use of the word “gadzooks,” any reasonable litigator would have refrained from saying the word again.

This is where the court mentioned the “God’s hooks” theory. Again, I don’t buy that explanation, but it wasn’t the basis for the ruling anyway. This was the basis:

After a court makes a ruling or a comment, the only words that a lawyer may use, if any, are ones stating that they do not agree with the ruling. Not “wow,” “crazy,” or “gadzooks.” They are all nonproductive, offensive, and disrespectful—and disruptive—to court proceedings…. The trial court was well within its discretion to find Thollander in direct criminal contempt.

Just to be clear, there are lots of words you can’t use after a court makes a ruling or comment, not just “wow,” “crazy,” or “gadzooks.” Those are just examples. But I thought you should know there is precedent excluding “gadzooks” specifically.

Did You Pack This Nobel Prize Yourself?

Your Behaviour Is That of a Lunatic, Your Honor