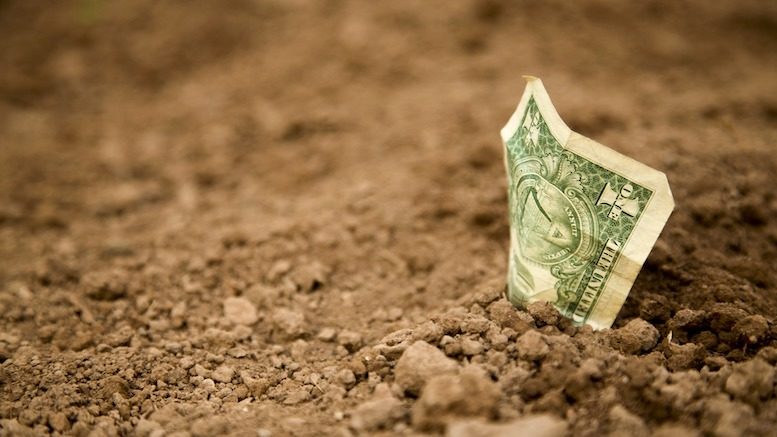 He did at least put them in a box (image: Nadja Donauer via pixabay)

“You’ve got an impressive slate of candidates,” Brian Manookian said on December 8 to a panel considering applications for a Tennessee Supreme Court seat. “Judge [Kelvin] Jones is not one of them.” Manookian gave a number of reasons for this, only one of which involved Jones’s admission that he buried $100,000 in his backyard to hide it from creditors.

Jones has been a judge in Davidson County, Tennessee, since 2014. His wife filed for divorce, and Jones was deposed in that case in July 2020. As you might expect, many of the questions in that deposition had to do with financial matters, and many of Jones’s answers were interesting. Which is sometimes not a good thing for answers to be.

Several of these answers involved the buried cash. This came up in connection with documents showing “various large deposits” to a bank account, cash deposits totaling more than $190,000. The wife’s lawyer was interested in learning where that cash might have come from, and noted that in discovery responses Jones said only that it came from “cash on hand.” Noting “that doesn’t really tell us very much,” the lawyer inquired further.

At first Jones did not seem entirely sure, but then recalled he had kept about $100k in a CD in various banks at various times, which he used for expenses related to investment property. He would withdraw a few thousand at a time when necessary, he said. Why not just keep that in a regular account? Jones explained that “in business, you don’t want to have a lot of cash in accounts because the state at some point, if you’re going to owe a bill for your hotel, can come in and garnish your account. So I didn’t want to have that much cash in an account.”

I don’t claim to be a financial expert, but as I recall there are penalties for early withdrawals from a CD, and I’m not aware of a reason the state or another creditor couldn’t garnish or seize money in a CD. Also, even if this explanation made sense, Jones had testified that the value of the CD was only about half the amount of the mystery deposits. Might there be another place from which he had dug up this cash, the lawyer asked? Turns out there was: his backyard.

I bought one of these Survivor tubs [Jones testified]. It has a top that screws on, … and it’s insulated, waterproof. It’s sealed. And that particular container, … had over a hundred thousand dollars in it. And it was buried in the ground right outside of our master bedroom….

The lawyer then followed up with some insightful questions about exactly how this worked:

Q. So you just dig a big hole in the ground and you put it in?

Q. So when you put the money in or whatever you have in there, you just put dirt over it?

Q. How deep down do you put it?

A. I probably had—it’s probably this tall [sic].

Q. Do you put grass on top of it or put it in a flower bed? I’m just curious.

These are the kinds of questions you ask when the witness just told you something surprising and you’re still processing it. I mean, the basic process of burying something is pretty well documented at this point.

Sixty pages or so later, the cash-deposits-and-buried-treasure issue resurfaced. It appears that the judge took out a big loan so he could invest in a hotel project. The hotel opened in 2008—right before the recession—and it failed a year or two later. The bank foreclosed and the judge was left owing about $700,000. He testified that for years, he would try to settle the debt for some smaller amount, telling the bank he didn’t have any money. (According to one report, the bank was garnishing his judicial salary at the time.) Finally, they said they would take $150,000, the judge testified.

As you can see, he did not say “let me go dig up that cash,” possibly because he had been telling the bank he had no cash to dig up. Instead, he asked his father-in-law to write a check for $100,000, saying he would reimburse him in cash, and then “shoved $50,000 into the bank within a really short period of time,” making a number of relatively small (and probably recently excavated) cash deposits in order to do this. Why? Some unfinished sentences followed:

Q. Certainly alerted me when I was looking through those [documents].

A. Well, it does, but it would have triggered all kinds of…. It wouldn’t have been an issue. I could have explained it because I knew where the money came from, but….

One phrase he might have been thinking of there is “money laundering,” or more specifically “structuring [financial] transactions to evade reporting requirements,” which is what the U.S. Code calls it. See 31 U.S.C. §§ 5324. This is probably one reason the Tennessee Bureau of Investigation is looking into the matter, as are the district attorney and the state Board of Judicial Conduct. It’s not the only reason, because this wasn’t the only problematic admission the judge made. But this one involves burying $100,000 in the backyard, so it’s funnier than the others.

You might not expect someone facing an investigation of this kind to respond by, let’s say, applying for a seat on the state supreme court, but then again maybe you would. Jones did that last September, along with several others who applied after a sitting justice died. The application included that pesky question, “are you now under federal, state, or local investigation for possible violation of a criminal statute or disciplinary rule,” and Jones did not answer “yes.” He did acknowledge the investigations, though, saying they were prompted by Manookian, who Jones described as an “oft[-]suspended attorney.” (Manookian has been suspended, apparently twice.)

Jones was reportedly “nonchalant” about all this at the December 8 meeting, where the panel had a few questions about his backyard pot of gold.

“It may seem strange,” Jones told the panel, “but I’m from Alabama.” Please, go on. “We keep money in mattresses, Mason jars and other places—particularly when you don’t get a significant rate of return from banks.” I googled “do people in Alabama bury their money” and nothing relevant popped up, and that was all the research I felt obligated to do on that one. Well, I did click on the related search topic “why do people bury their money,” and found this “survival” website which notes among other things that “pirates did it.” Ordinarily that’d be good enough for me, but I still question this particular practice. Again, I don’t claim to be a financial expert, but I’m pretty sure the rate of return you get from a hole in the ground is zero percent.

Judge in Philippines Discriminated Against for Being Psychic

Fundraiser Held for Defendants in the Pants Lawsuit

Note: Personal Sovereignty Claims Not Getting Any More Valid