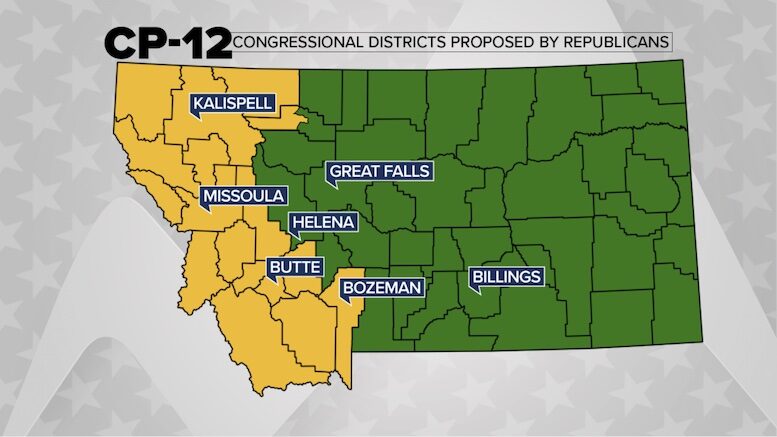 This isn’t for purposes of The Hunger Games, a tale in which the former United States is divided into oppressed districts ruled by a dictator. That’s a science-fiction story set in the future, maybe five to seven years from now. Neither the books nor the films describe the districts in any detail, but nerds have concluded that what is now Montana would be in the fictional District One, or maybe Seven, or possibly Two, but also who cares. Because this is about the fight over how Montana’s congressional districts will be numbered, now that a census has somehow determined Montana gets more than one.

This fight has exactly the same importance as the one over which Hunger Games district Montana would be in—none—and so of course Republicans and Democrats could not agree on the answer.

What is now the state of Montana previously had dinosaurs in it for a while, but no people until maybe about 15,000 years ago. Those people did things that were important to them until the 1800s, during which a lot of white people started to show up and eventually became a real problem, except for Custer. The United States formed what it called the “Montana Territory” in 1864, and that became a state in 1889. And that, my friends, is the history of Montana.

For the last 30 years or so, Montana has had only one U.S. representative. The total number in the House is currently set at 435, and they are “apportioned” based on each state’s share of the population (but each state gets at least one). Montana had two representatives for most of the 20th century, but lost one after the 1990 census. Now it’s back to two representatives and two districts, which poses an obvious problem: which district gets to be District One?

As Slate reported on June 7, despite or maybe because this makes absolutely no difference at all, the state’s redistricting commission split along party lines.

Under Montana’s constitution, redistricting is done by a commission of five citizens. The five are selected in a way that suggests there was a dream of nonpartisanship that has not entirely come to pass. The citizens cannot be “public officials.” But four of the five are chosen by public officials, specifically the majority and minority leaders of each house, who get to pick one each. Did any of them pick a revered but neutral citizen? Nope. Two Republicans and two Democrats. The four commissioners then have 20 days to agree on a fifth, but if they cannot agree, the state supreme court will pick one. Did they agree? Nope. So the court picked a law professor.

Then it was time to agree on how to draw the map of the new districts. Or, not to agree, which left the professor to break the 2-2 tie. According to Slate, the map that resulted was actually a reasonably fair semi-compromise proposal, so arguably the process worked to that extent. But then “came the big decision: which district got to be No. 1.”

Could they agree on this? Nope.

The new map splits Montana into a western district that includes (for example) Kalispell, Missoula, and Butte, and also curls around in the south to include Bozeman; and a larger eastern district that includes Helena, Great Falls, and Billings, among others. Now, plainly, if you have one thing on the left and one on the right, and you must number them, they are to be numbered One and Two respectively, all else being equal. See Theodor Geisel, The Cat in the Hat, pp. 32—35 (1957). And, in fact, that is how Montana’s two districts (similarly arranged) were numbered before 1990. But as Slate reported, that is not what the GOP commissioners proposed:

This makes internal sense to your correspondent—the senior member gets the first district—but it didn’t to the commission’s Democrats. Joe Lamson, a longtime state political figure with wispy white hair who appeared to be calling in from an attic, emitted an extremely weary and audible sigh before he began speaking. He noted that the pre-1990 western district was the 1st District, and that “it’s simple reading of the map—in our particular culture it’s predominantly from left to right. One, two.” Concluded Lamson: “I would oppose this motion because it doesn’t make any sense.”

And it took no time at all for the Democrats to suspect the other side might be up to something:

Then Democrat Kendra Miller spoke. “I could not care less how they’re numbered,” she said, but this was belied by the frowny angle of her eyebrows. “Why would we need to name the current congressperson’s [district] No. 1? Why would there be a preference for that?” She asked whether Rosendale had requested the privilege. [According to Essmann, he had not.]

Miller then pointed out that the draft version of the map that Essmann and his Republican colleague had submitted had labeled the western district as No. 1. Lamson spoke again, his exasperation having failed to recede. “The western district has always been the 1st District,” he said, “and I am confident that it will remain that, whatever you do to give some weird perceived advantage to one of the worst congressmen this state has ever seen.” (Rosendale, among other things, voted against awarding medals to Capitol police officers who responded on Jan. 6.)

Let’s be clear: in many cases, the other side (whichever it is) is absolutely up to something. But it seems unlikely that was true here. Looking at U.S. congressional districts, there are a few states where the numbers at least generally go left to right (Idaho, Maine, Massachusetts), but this is overwhelmingly not true. Many tend to go right to left, and in most there is no rhyme or reason at all (looking at you, Texas). But it looks like what usually happens is that new districts are carved out of old ones when necessary, and the older one just stays where it was, or at least its center of gravity does. Colorado’s a good example. At first it had just one district. When it got a second in 1893, they broke off Boulder, Fort Collins, and so forth. And so on, carving parts off Number 1 each time, but always leaving the heart of it in Denver, where it still is. In other words, they don’t take the map each time and make it look nice left to right, no matter how much I would prefer that.

I guess the effect of this would often be to leave the most senior representative in No. 1, but that’s not necessarily true, and I doubt there’s much in the way of bragging rights that goes along with this. Although if you’re the kind of guy who would refuse to honor the officers who defended the Capitol, for whatever weird perceived advantage you see in that, maybe you’d go around bragging about your district number, too.

In any event, because the Republicans and Democrats couldn’t agree, the professor broke the tie. And therefore, District One shall henceforth be … the one on the left. As it should be.