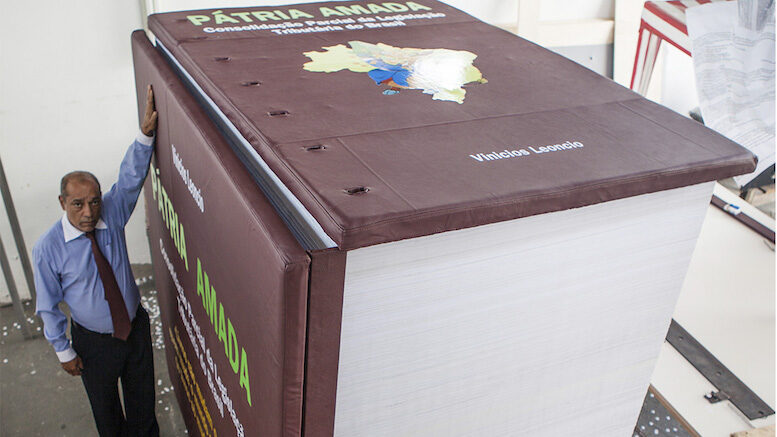 Not the world's tinest lawyer

This isn’t new but seems worth mentioning. In 2014, after a 23-year effort, Brazilian lawyer Vinícios Leôncio finally finished compiling the country’s tax laws. This may or may not have already been done in some way by an official body, but if that had happened, they presumably didn’t put it in a single volume like he did. Because that volume turned out to be more than 41,000 pages long, and that’s with pages that look like they each measure 8.5 x 11 feet, not inches.

He did use 22-point Arial font, though, so it could have been a little smaller.

According to this 2020 report, Leôncio had long been frustrated by the “excessive complexity of the country’s tax laws,” and decided to try to put them all into a “single, absurdly large volume as a protest.” He achieved that goal, obviously, but it took him more than two decades and almost US$200,000 of his own money. The report says Leôncio employed forty “researchers, jurists, and trainees” over the years, and had to “rent a shed and import a printer from China with the ability to print billboards” in order to create the book itself.

In March 2014, he traveled to the capital, Brasília, to present his ginormous volume to the National Congress. (The report cited above totally cops out on the important question of how he got it there, saying only that he showed up “carrying in some unusual way one of the biggest books in the world.”) The politicians were reportedly “amazed” by the size of the book (the few who came to see it, anyway), but I guess it’s not surprising that the report says nothing about whether it convinced them to take any action.

This 2019 Bloomberg report, which shows Leôncio sitting on his book and dangling his feet over the side, says that, at the time, the administration of President Jair Bolsonaro had promised a new tax system would be in place by the following year. But given that searches turned up recent articles entitled “Brazilian Tax Reform: Are We There Yet?” and “Tax Reform Stalls,” it looks like that hasn’t happened. Bolsonaro has to devote a lot of time and energy to being a horrible person, so that may have drained some of the momentum out of the push for reform, but I don’t claim to be an expert on Brazilian politics.

The title of Leôncio’s book is Pátria Amada, which is apparently Portuguese for “Beloved Homeland,” i.e. the one Leôncio says he is trying to rescue from its own tax code. “Pátria Amada” is also the national anthem of Mozambique, so now that’s something you know. (The lyrics to that song say nothing about the tax code, unless that’s what they mean by “no tyrant will enslave us,” which is possible.)