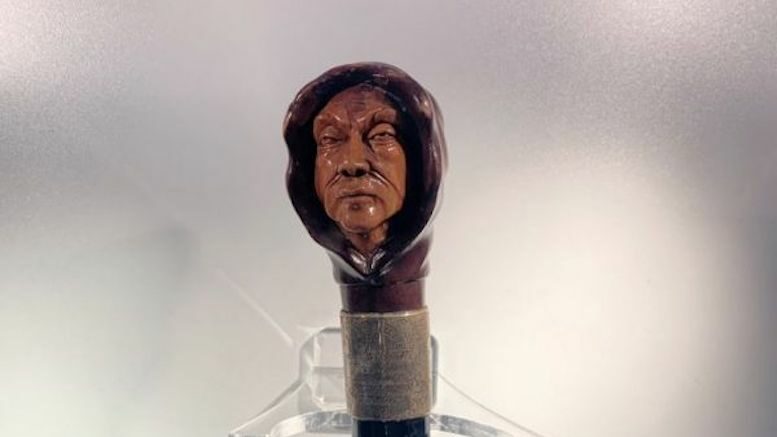 The people at the UK’s College of Policing announced last week that they had managed to locate a walking cane that has “the only reported facial composite” of Jack the Ripper carved into its handle, eight years after the artifact disappeared from a local staff college.

Too bad they were never able to locate Jack the Ripper himself, but at least they’ve solved this mystery.

According to the report, this cane was originally given to Chief Inspector Frederick Abberline by his staff in 1888, “at the conclusion of his most infamous case, the Whitechapel murders, which were committed by Jack the Ripper and remain unsolved.” This statement is puzzling for a number of reasons.

There were (at least) 11 unsolved murders in the Whitechapel district of London between April 1888 and February 1891, five of which, all in 1888, are generally ascribed to the a-hole known as “Jack the Ripper.” But no one knows whether all of these were committed by the same person, because that’s what “unsolved” means. And certainly no one had any idea at the end of 1888 whether that particular string of murders had come to an end. So if the gift actually was given in 1888—and it does appear to have a message with that date—it could not have been intended to commemorate “the conclusion” of the Ripper case. The case was still open. Nor would this have been to commemorate the conclusion of Abberline’s career with the Metropolitan Police, because he didn’t retire until 1892.

Then there is also the nontrivial fact that Abberline had absolutely no success whatsoever in solving even one of the murders in this most notorious of all murder sprees, so to be honest, this seems like an incredibly terrible gift. “Well, Chief Inspector, we all chipped in and got you this cane with a carving of what may or may not be the face of the murderer you have been unable to catch, who may go on killing for years as a result, leaving a legacy that will forever associate your name and career with complete and abject failure. Oh, there’s also cake.”

Nor does the report elaborate on exactly how the “facial composite” was created. There apparently were sketches printed at the time based on witness reports (not likely to be accurate) and there have been others since, but they all seem pretty lame. To me, the face on the cane looks a lot like Frederick Abberline (or maybe Wilford Brimley) except for the lack of facial hair. That would make a lot more sense than giving a detective a composite of the heinous killer he didn’t catch to carry around with him as a reminder.

The cane is currently on display at the College of Policing, where an official said it would be shown “alongside the original newspaper cuttings, so that our officers can see first-hand how far we’ve advanced in policing since then.” Compared to Frederick Abberline, at least, they’ve probably come a long way.