New York resident Raina Kumra has sued the White Slab Palace restaurant in Manhattan, alleging that she was hit by a 150-pound moose head that fell off the wall above her during a party.  The moose head, which sports antlers over three feet across, seems to have been part of the restaurant's Scandinavian-themed design.  (This enabled the New York Post to say that Kumra claims she was "struck by the restaurant's decor.") 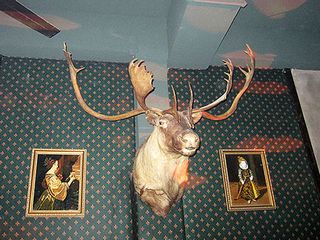 "I'm actually a caribou," the beast would have said,
had it been able to speak English and not been decapitated

Kumra's lawsuit, filed in Manhattan Supreme Court last week, alleges that the restaurant "had a duty to provide an environment free from falling objects," and that it violated that duty by being "grossly careless" in mounting the moose.  This allegedly led to the moose coming loose about 1 a.m. on October 4, falling, and striking Kumra on the head.  She alleges that since the moose-head strike she has "lost cognitive skills and suffered chronic neck pain, fatigue, dizzy spells and anxiety from mounting medical expenses," according to the New York Daily News.  She seeks unspecified damages.

Interestingly (or not), Kumra's Twitter feed did go silent for about two weeks after the date of the alleged strike, which may tend to support her claims about the accident.  On the other hand, the tweet immediately prior to that date reads, "Tom igoes pecha kucha on itp projects at the itp reunion was so true!" which may tend to undermine her claims about lost cognitive skills.

Yelp reviews for White Slab Palace do not mention any dangerous conditions and/or the moose, although one reviewer described the bar stools as "slightly treacherous" and another was spooked by a "big ass stuffed bear" that "looked at me funny."

By the way, the phrase "big ass stuffed bear" is one that needs a hyphen, and one of the few in which it really does matter where you put that hyphen.