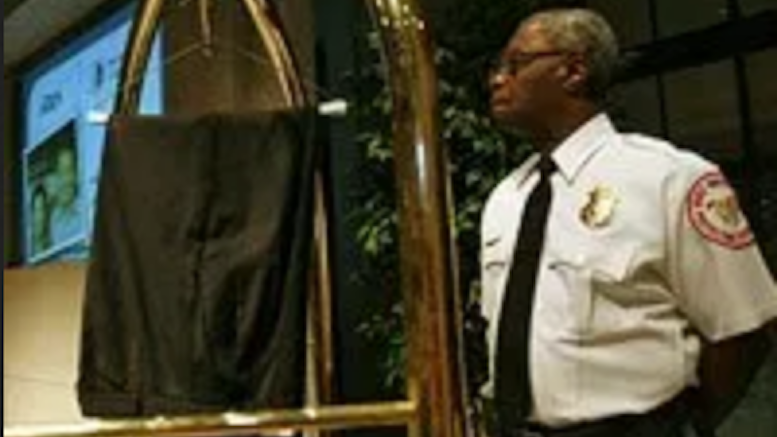 You may recall the long-running saga of Roy Pearson, Jr., the former administrative-law judge who accused a dry-cleaning business of losing a pair of his pants and embarked on a tireless legal quest to obtain full compensation for the same.

How long has this saga been going on? Let’s put it this way: when I last mentioned it almost exactly four years ago, that was at least my twenty-eighth post discussing the matter. See “The $65-Million-Pants Case: Chapter 28” (June 9, 2016) (summarizing and providing links to many of those). Having predicted more than once that the saga might be coming to an end (see, e.g.,”A Farewell to Pants” (May 28, 2010)), and having repeatedly been wrong, I did not make that prediction in 2016, and I was right.

There was at least one more chapter to go.

For the full background and all the details you could possibly want, please see Chapter 28. But let me try to summarize it here, perhaps for the last time. Roy Pearson, Jr., was an ALJ in the District of Columbia. He claimed a business called Custom Cleaners had lost a pair of his suit pants. The owners disputed this. They eventually offered to settle, but Pearson wasn’t satisfied with the offer. Because the business had a “Satisfaction Guaranteed” sign on the wall, he argued, it was in breach of that promise so long as he remained unsatisfied. The benefit of this legal standard for Pearson was that the business’s legal obligations to him would be defined by his own personal subjective feelings of satisfaction, and so he and he alone could determine whether it had met those obligations. The drawback of this legal standard for Pearson was that it was complete bullshit. But it would prove impossible to convince him of that, and so the dispute went on and on. And on.

The pants allegedly disappeared in 2005. Whenever the business offered to settle, Pearson moved the goalposts, saying he remained unsatisfied. His demands continued to escalate, and he also offered a ridiculous theory of the damages he sought under the D.C. consumer-protection statute. By April 2007, he was demanding over $65 million to settle a claim for a pair of missing pants. The case went to trial, and he lost. He appealed and lost. He sought en banc review and lost. That was, at least, the end of the litigation against the dry cleaners. But Pearson wasn’t done. After losing his ALJ job—some believed the litigation showed poor judgment, you see—he sued for wrongful termination, still insisting he had been in the right. He lost. He appealed, and lost.

Turns out that if you persist in making the same frivolous arguments for a sufficient number of years, the bar association may take notice. In 2015, the D.C. Office of Disciplinary Counsel filed ethics charges against Pearson, which, of course, he furiously contested on the grounds that he had been right all along. He lost. And, of course, he appealed.

The D.C. Court of Appeals agreed that Pearson had violated D.C. Rules 3.1 (frivolous arguments) and 8.4(d) (interfering with the administration of justice). Now, making a weak or aggressive legal argument once or twice is not going to get you in trouble (probably). But as Pearson’s lawsuit went on, the court explained, his “liability and damages arguments morphed into the preposterous.” Not only did he demand well over $60 million in a dry-cleaning dispute, portions of that total demand were themselves independently stupid. For example, he sought $3 million in emotional distress (in a lost-pants case) and demanded a judgment that would require the owners to pay him $10,000 in the future whenever he felt “unsatisfied.” The subjective “satisfaction guaranteed” argument was nonsense to begin with. In short, “no reasonable attorney could have concluded” that this case had “even a faint hope of success on the legal merits.”

As for interfering with the administration of justice, one way to do that is to persist in aggressively litigating a stupid case for years on end. This case should have been in small claims court (if brought at all), the court pointed out. By filing it in superior court, flooding his opponent with discovery demands, and repeatedly making the same bogus arguments, Pearson was essentially wasting everybody’s time (including the court’s).

It probably didn’t help that Pearson—who represented himself—has continued to blame everybody but himself for this disaster and to toss a few insults into his briefing for good measure. He called the disciplinary counsel’s arguments “crude and inept,” accused the hearing committee of being racists, and called the D.C. Court of Appeals decision on the merits of his pants case “moronic.” That would be the same D.C. Court of Appeals reviewing the sanctions order against him, which further suggests Pearson has not gained much wisdom over the course of this saga. The result? A 90-day suspension, which seems pretty lenient for such aggressively bogus conduct spanning multiple cases and (so far) 15 years.

Is this the end? Well, filing a petition with the U.S. Supreme Court is the one action that Pearson hasn’t taken in these cases (I think), so maybe he will draw the line there again. Or maybe not. In the past, I’ve encouraged him to petition that court or, possibly, the International Court of Justice. I think at this point I’d have mixed emotions about seeing it continue. On the one hand, 15 years seems like plenty. On the other hand, I guess I did just provide the link to the ICJ.