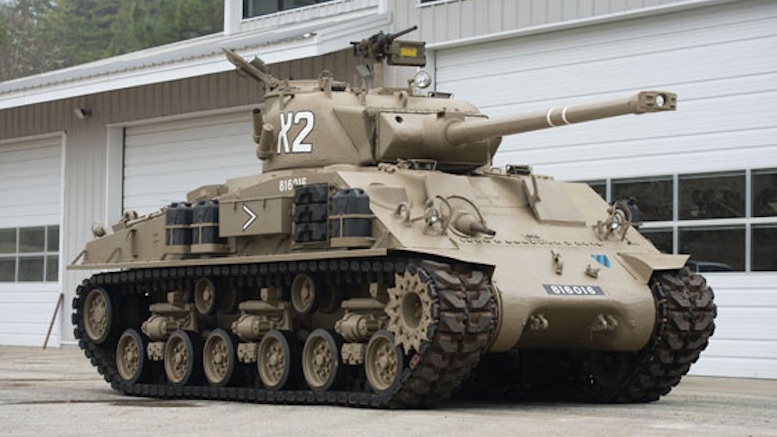 Saw this report of a new case filed in San Mateo County, California:

Contract. Defendants were not truthful about the condition of an Israeli M50 Sherman tank plaintiff purchased for $298,000 at an auction.

A number of questions came to mind, so I looked into it.

Turns out the plaintiff bought this tank in July 2014 at the auction of the Littlefield Collection, which at the time was possibly the largest private collection of military hardware in the world (not counting dictators). According to the Mercury News, Jacques Littlefield was a retired engineer who decided he’d like to have his own armored brigade. That’s actually not too far from the truth, because he had collected something like 200-300 tanks and other military vehicles. When he died, he left them all to the Collings Foundation, a nonprofit that preserves and exhibits such things. It auctioned part of the collection to raise funds for a museum to display the rest.

Of course, some people probably don’t find tanks interesting at all, and even history geeks like me would not be too interested in, let’s say, the M48A5 armored bridge carrier. (Unless I needed to bridge something while being shot at, and then I’d be super-interested.) Granted, that one sold for just $103,500, but I’d still rather have a Tesla. But some of these things had remarkable historical value, chief among them this German Panzer IV tank. 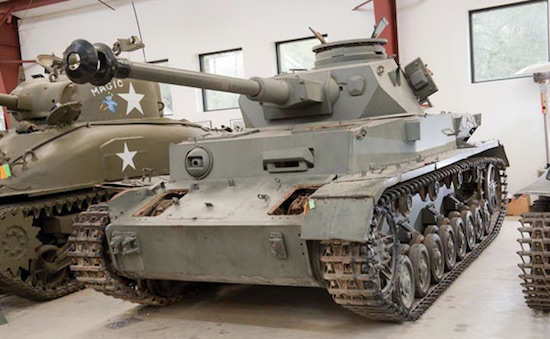 According to the auction site, this tank was probably built in early 1944. After the war the Soviets gave it to Czechoslovakia, and the Czechs later sold it to Syria (also a Soviet ally then). It was still serving in the Syrian Army when the Israelis captured it in 1967. They later used it for training purposes. So it’s not just a Nazi tank, it’s a Nazi tank that ended up in the Israeli Army. I’d pay a lot for something with that kind of history.

Not $2.5 million, though, which was the high bid. Not the winning bid, because that still didn’t meet the reserve. This tank was admittedly not in great shape, which may be why it didn’t sell, but the good news is that they still have it if you’re in the market for a fixer-upper.

Anyway, the Sherman tank Damon Becnel bought was in “beautiful condition.” The site described the paint, tracks, and suspension as “perfect,” and said the tank still runs and drives well. And of course most importantly the turret still turns so you can point the gun at the guy who just took your parking spot. All this for just $293,250 (plus shipping).

Why did Becnel want to buy a tank? Well, because he could, probably. His family has made lots of money in Florida real estate, which is why he had 300 large to drop on an armored vehicle in the first place. He’s not a collector, and doesn’t seem to have really planned this one out: “Becnel seemed surprised when he was asked where he would put his new 38-ton prize,” the Mercury News said. “I haven’t thought about that yet,” he replied. But with no shortage of Becnel-owned real estate for him to tootle around on, no reason to be concerned.

But he has now changed his mind, it appears, although it isn’t clear why. The case report made it sound like he’s claiming the tank was not as represented, but the complaint tells a different story.

Becnel says he went home, completed the paperwork one must complete when buying a tank, and then sat back to await delivery. But no matter how many times he checked the mailbox, no tank. Weeks passed. Inquiries spawned “a litany of excuses.” Finally, Becnel flew back to California and found that not only was his tank still on the property, they were using it to tow other tanks around. Worse, they had left it “sitting out with no cover, with the hatches open, exposing the pristine interior of the tank to be exposed [sic] to the elements.” He says the tracks and paint were damaged, so the tank was no longer the “museum quality” item he bought. Based on these facts, Becnel now wants to rescind the contract.

This is a little odd.

The complaint concedes the original description was accurate, so he got what he paid for. And the alleged post-sale damage seems pretty minor, which is what you’d expect with a vehicle that is, after all, built like a tank. The track damage might be debatable, but I got a little suspicious upon reading that the tank was supposedly damaged by being left open “to the elements.” I’m not sure if you’ve heard, but California is in the grip of a years-long drought. We don’t have “elements.” We sure didn’t in the weeks following the auction, during which time the amount of precipitation in the tank’s area was exactly 0.00 inches. (Yes, I checked.) So unless the interior paint was scratched by falling leaves or acorns or something, I’m not sure what damage the “elements” could have done.

But let’s assume there is at least minor damage. When this kind of thing happens the remedy is normally that you get whatever damages are necessary to give you what you paid for under the contract—not to rescind the whole deal. The complaint also includes tort claims, so he is asking for damages, but he doesn’t even ask the court to enforce the contract itself.

Total speculation here, but it sounds to me like somebody impulse-bought a Sherman tank for $300,000 and now is having second thoughts.

The moving company admits it used his tank to tow other stuff around, but claims that it is now again “immaculate” and ready to be shipped. “We had two guys Simple-Green everything they could get their hands on,” the owner said, “and it’s been waxed.” Normally, of course, one would not wax a tank, thereby making it shiny and easier to see. But historical accuracy is probably not what Becnel was interested in, so, fine.

By the way, I am not ignoring the other major question this story raises, namely: you can just go buy a friggin’ tank? Well … yes. There are some complications, of course, but I’ll have to come back to those. Keep saving up for the down payment until then.