In one of the more creative bank-robbery attempts we've seen recently, a Tucson man tried to rob a bank on Monday claiming that he had a bomb in his mouth. The man presented a note making the claim, which he had to do because he had covered his mouth in duct tape.

I guess the note would have read something like this: "Good morning. I have a bomb in my mouth which I will set off if you don't give me money. I realize that will probably kill me without harming anyone else, since although I have a very large mouth it is obviously still not big enough to hold any meaningful quantity of explosives, let alone a detonator, and you'll have to trust me that I could set it off with my tongue if necessary since there is no visible control mechanism. And once I'm dead, of course, I won't be able to harm you in any other way. But I'd appreciate it if you would overlook these potential problems with my scheme and give me some money anyway. Thank you for your cooperation."

Whatever it said, it didn't work. Someone called police, who entered the bank and rushed the suspect. (According to a police spokesman, they recognized him by the tape on his mouth.) "It was very brave" of the officers, the spokesman continued, "to separate him from the public." Well, yes, assuming you think they really believed he had a bomb in there behind the duct tape.  Otherwise, somewhat less brave.

Police took the man outside, cuffed him to a fence, and then called in a bomb squad robot to check the man's mouth. Apparently these robots are pretty dextrous, as this one first removed the duct tape and then checked inside the man's mouth: 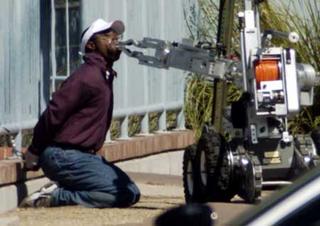 An object was found inside the man's mouth, but police did not identify it other than to confirm that it was not in fact a mouth bomb.

The man has since admitted that the bomb threat was a hoax, which is a good course of action — I mean, you don't want to lose credibility at that point by sticking with your original story — and also that he was behind another robbery attempt at that same bank in January. What he was armed with at that time was not reported.