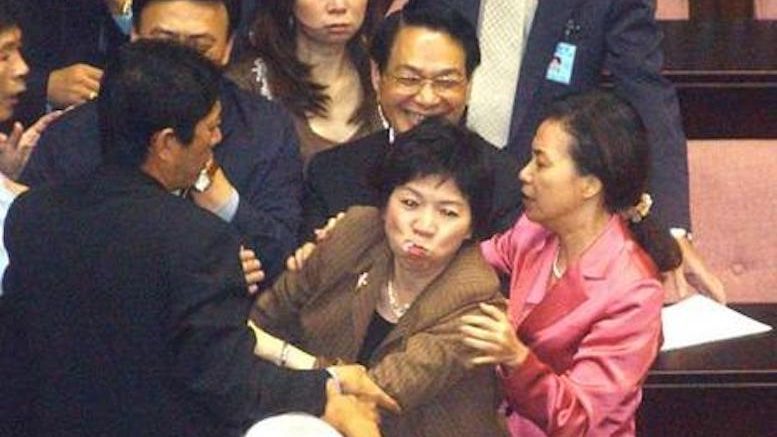 When all else fails

A fight broke out in Taiwan’s parliament on Tuesday over an opposition party’s proposal to reinstate direct air and sea transit links with mainland China. In a weak democracy like the United States, such a proposal might die in committee or be indefinitely tabled, or something decadent like that. In Taiwan, they still do it the old-fashioned way.

When the proposal was brought up for review, members of the ruling Democratic Progressive Party charged the podium and “protested noisily,” causing pandemonium in the chamber.  One legislator spat on another (“She spat saliva!” yelled Hun Hsiu-chu, accurately describing what had been spat), and as others battled, DPP deputy Wang Shu-hui grabbed the draft document from the speaker and tried to eat it.

CSPAN, are you reading this? This would do more for your ratings even than Stephen Colbert.

Wang was immediately set on by Nationalist Party delegates, who tried to get her to cough up the bill by shouting and pulling her hair. Wang stuck it out, though, and later spat out the document and tore it up. According to Reuters, this was the third time that “filibustering by the DPP had prevented a vote” on the measure.

That kind of “filibustering” hasn’t been seen in the United States since Strom Thurmond ate the 1964 Civil Rights Act. Luckily, somebody had a copy of that one.

Brawl in Taiwan’s Legislature Does Not Result in Compromise

Battle of the Bigfoot Researchers