Representing a criminal defendant in Greensburg, Pennsylvania, Jeff Leonard was concerned that a witness to the crime might be present at the courthouse at the same time his client was supposed to show up for a preliminary hearing. Because the witness was scheduled to look at a photo lineup that same day, Leonard did not want the witness to see his client’s face beforehand. The solution was obvious. 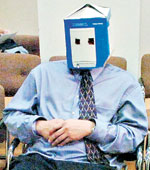 Note that in order to make a favorable impression on the judge, Client X also followed his attorney’s advice to dress professionally, wearing a dress shirt and tie, with colors somewhat coordinated with the box.

Client X arrived early for a 10:45 a.m. hearing, which may not have been the best idea since he then had to sit in a public waiting room wearing a box on his head. This did shield his identity but did not avoid calling unwanted attention to the client. “All he’s doing is standing out more,” said a witness (to the box, not the crime). “If he was trying not to be known, he shouldn’t have the box. He should be standing in the corner somewhere.” (That wouldn’t have helped, either.) This witness also assumed that Client X had either committed a very serious crime or was in some sort of “witness protection program.”

That was the smartest thing any of the onlookers were quoted as saying. The article quoted three courthouse workers who had heard about the box and made their way downstairs to get a look, which seems to have resulted in the following exchange:

That sounds more like something from My Name is Earl than an actual conversation that people would have. Too bad the rest of the workers didn’t come down:

Leonard said that the box was his idea and that he thought it would “force the commonwealth to meet its burden without the defendant having to reveal his identity.” He could not resist saying that he had been “trying to think outside the box, so to speak.” That was probably hilarious to his client, but what the client might have been thinking inside the box was not reported.

The precautions turned out to be unnecessary, as the judge seems to have accepted a plea bargain under which the charges—stealing $600 worth of wire—would be dropped as long as Box Man, who had no prior criminal record, paid for the wire. Arresting officer Chris Kent was not that happy about the deal, but managed to get a decent quip in as he called Leonard and his client into a meeting room to discuss what would happen next. “You and your Happy Meal want to come back here?” he was quoted as saying, which is really pretty good.

Sadly, Happy Meal Box Man did not comment on the case before leaving the courthouse, let alone call a press conference.

“We Will Get You,” Store Promises Vinegar Thief