Lt. Col. Steven Jordan is currently on trial for 12 charges relating to the torture — sorry, "maltreatment" — of detainees at Abu Ghraib prison.  His defense attorneys have argued that Jordan was actually not in charge of the interrogation center at the time of the alleged offenses (between September and December of 2003), and that Col. Thomas Pappas was in charge then.  Given the timing involved, It appears to have become a critical question whether Col. Pappas attended a Halloween 2003 toga party at Abu Ghraib and spoke to the troops to "lift their spirits," that being some evidence that he was the one in charge.

Off the top of my head, three thoughts:

Jordan, who would have been the "Otter" in the Abu Ghraib version of "Animal House," is the highest-ranking officer to be charged for what happened at Abu Ghraib.  Pappas ("Bluto" Blutarsky) was reprimanded and fined $8,000 for approving the use of dogs during an investigation, but has not been criminally charged. 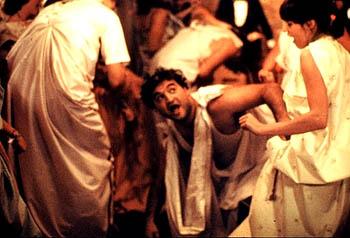 Did I just compare Abu Ghraib to "Animal House"?  Good God.  Although, the AP did it first. I blame the media for its superficial treatment of this important issue.

Please Report Me If I Am Missing. Thank You.