Testifying on Tuesday before the Senate Homeland Security and Governmental Affairs Committee, New York Mayor Michael Bloomberg told committee members that he has a "very important secure phone" in his kitchen at home for use in case of emergencies.  Specifically, he said (in response to a question about communications issues), "I will say that when I became mayor, I was given a very important secure phone that is in the kitchen of my house, so that if I wanted to talk to the Air National Guard and shoot down a plane, I just press a button."

"A low murmur spread throughout the room," as people tried to figure out whether he was serious.

Bloomberg explained later that the line about him shooting planes down was just a joke (the kind that is hilarious coming from the mayor of a city that has actually been attacked by hijacked planes), but the secure phone, which reporters immediately dubbed "the Batphone," really exists.  Installed in 2002, the phone has an encryption device so that calls to or from other very important secure phones will stay secure.  There is no direct line to the military, and the mayor did not say what it might be used for in an emergency.  In fact, he said, it has never been used in the five years since it was installed — except by telemarketers. 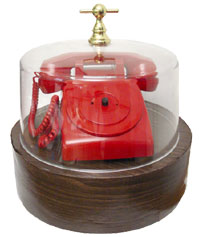 "[The Batphone] has never been used," Bloomberg told reporters, "other than to answer an occasional call for — did I want to subscribe to a ridiculous magazine, buy an insurance policy or some other such particular thing. . . . But it’s a regular telephone [apart from the scrambler], so if you don’t sign up for the service of, ‘Do not call me during mealtimes,’ you get lots of calls."  He theorized that the telemarketers who had called him on his very important secure phone had dialed the number at random.

Asked what thoughts go through his mind when the Batphone rings, Bloomberg said, "It’s somebody trying to sell insurance.  That’s what I think."

He clarified that the secure phone is not red.

Men Who Posed as Wife Beaters Sue Over Wife-Beater Portrayal