A former board member of the Lakewind Church in Tennessee has sued the church and its pastors, saying that he was injured when he fell after the spirit took him during a church service.

According to the complaint, Matthew Lincoln was participating in the evening service at the church when a visiting minister touched his forehead after Lincoln came to the altar. “Mr. Lincoln received the spirit and fell backwards striking the carpet-covered cement floor . . ., causing him to sustain severe and permanent injuries.” Lincoln alleges that the fall aggravated a pre-existing back injury, rendering him unable to work. 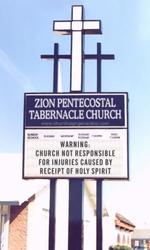 He says the church is responsible  because it “has a practice and custom” of having “catchers” whose job is “to catch someone who would fall out, faint, lose control, or otherwise need assistance when the spirit caused them to fall out while being prayed for.” Lincoln said that in the past the catchers always caught him, but on this occasion, they did not. He is suing the church for negligent catcher supervision.

Lincoln wants $2.5 million, although he is likely to have difficulty proving at least the lost-earnings part of his damages. According to the complaint, Lincoln was already unable to work due to his previous back injury, though he had recovered sufficiently to play guitar in the church band and to “pursue his odd hobbies” (which seems to mean something like “odd jobs” as opposed to hobbies that are truly odd). He had also formerly operated a music business of some kind, but the complaint says that too had suffered a setback.

The equipment he used in that business was destroyed by lightning.

CIA Admits It Spied on Senate Investigation of CIA