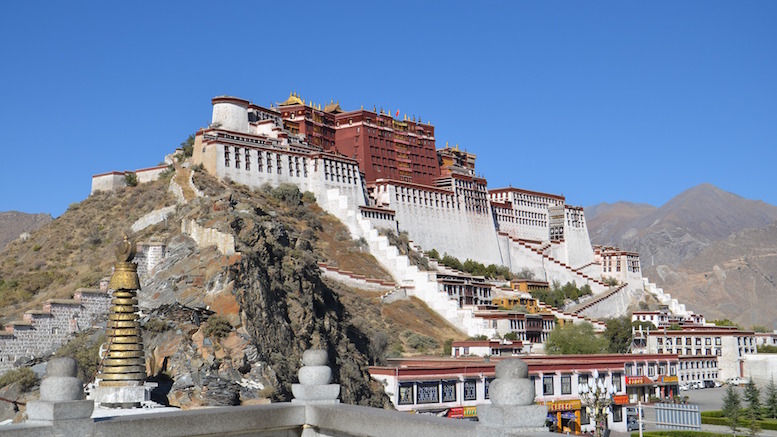 The bad news is it comes unfurnished

This isn’t the first time I’ve mentioned China’s official reincarnation rules (this was), but they were back in the news recently for a couple of reasons. First, according to the LA Times, last year some jackass pretended to get himself “ordained” as a “living Buddha” under these rules, and that became a big deal. Second, and unfortunately, the Dalai Lama‘s current physical incarnation is almost 81, so where the next one will show up is of more concern with every passing year.

Because the Chinese government is determined to have the next one show up already in its clutches, for years now it has forbidden anyone to reincarnate without express written permission.

Its official lamafication procedures are set forth in State Religious Affairs Bureau Order No. Five: Measures on the Management of the Reincarnation of Living Buddhas in Tibetan Buddhism, issued in 2007. Order No. Five begins by saying it was formulated “in order to guarantee citizens’ freedom of religious belief” and respect the practices of Tibetan Buddhism. Which is hilarious! In fact it was formulated in an effort to tighten control over Tibet by ensuring that only state-approved personnel are able to get into the lama business at all, much less get promoted. How does it do this?

I guess the first question is, how does the process actually work (for actual Tibetan Buddhists, that is)? I knew absolutely nothing about this, so I did some research. I mean, it’s not like I’m running for president here, so I feel obligated to know stuff before bothering you with opinions. So I went on a very short pilgrimage (to dalailama.com) to find out more, and returned moderately enlightened.

This enlightenment bestowed by Wikipedia

A lama is a respected spiritual teacher (not just any monk, like I thought, and also not a South American pack animal, as some apparently think). It’s like “guru.” Buddhists believe that souls are reincarnated endlessly until freed by spiritual purity, but that really spiritual people may choose to reincarnate, remaining aware of their past lives but hanging around in order to help others. It follows that most if not all of them become lamas.

Of course, there are lamas and then there are Lamas. The current Dalai Lama is the 14th in a line going back to 1391. The first Lama was not recognized as such until after his death in 1474, when a child turned up who had “amazing and flawless recollections” of the first one’s life. This convinced everybody that he was a full-on reincarnation of the first guy, who they then understood had been a proto-Lama all along. Not wanting to miss the next one (or, he’s really the same one, it gets confusing), they started looking for the next incarnation as soon as the existing body wore out. Luckily they were successful 12 more times in a row, most recently in 1937 when they found a two-year-old destined for greatness.

How does this search work? Well, various ways. The previous Lama may have made predictions, oracles may be consulted, or somebody may have a vision. They send out search parties and look for signs. For example, here’s how they found the current Dalai Lama:

So, not the most scientifically rigorous process, it turns out. (I did think it was interesting that they used a control group in the final test, at least.) But at least it was theirs. The state’s rules are, needless to say, quite different:

Once the “reincarnating living Buddha” has all his paperwork in order, he will then be trained at the nominating monastery—after a training plan has been approved by the state, of course. And again, anyone carrying out “living Buddha reincarnation affairs” without the proper authority is in big trouble.

This process is well underway; according to the Times, the state reported in January that there were no fewer than 870 verified incarnations of Buddha in its verified-Buddha-incarnation database. (Yes, they have a Buddha database.) So now you know how to get a reincarnation permit.

Or you could try this the old-fashioned way, by getting yourself reborn “due to the power of compassion for sentient beings and based on prayers to benefit others,” overcoming bad karma through virtuous actions in your day-to-day life. That’s probably a lot harder to do, actually, but involves a lot less paperwork.

A Few Tax Arguments Not to Make

Bar Complaint Charges Judge and Prosecutor With Repeated “Ethical Lapses,” If You Know What I Mean