It appears that Chief of Police David Dicks is still pursuing his campaign to keep pants from sagging in Flint, Michigan, as he announced back on June 25.  Dicks described the wearing of low pants as "immoral self-expression" (which makes you wonder what he would call the wearing of no pants), and issued a memo directing officers to enforce the disorderly conduct ordinance against such miscreants.

Recently a reporter from the Detroit Free Press did a ride-along with Dicks as he patrolled his city on the lookout for immoral waistlines.  "Some people call it a fad," the chief told him.  "But I believe it’s a national nuisance.  It is indecent and thus it is indecent exposure."  Actually, he clarified that only in particular circumstances is it "indecent exposure."  According to the report, Dicks said that offenders would be penalized for indecent exposure, disorderly conduct, or let off with a warning, based on certain scientifically based criteria that a Free Press artist depicted as follows: 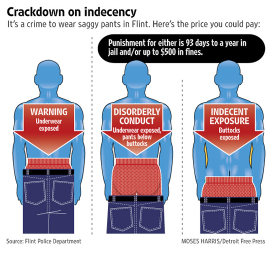 A Class C offense, exposing a portion of the undergarment but no skin, will result in a warning.

A Class B offense involves a sag below the gluteal curve, but one that similarly exposes only the undergarment.

Class A violations are those in which the sag of pants and/or undergarment results in any exposure of the rear cleavage.

Both the latter offenses could result in a year in jail.

During the dramatic ride-along through Flint, which as the article noted has been called "one of the most violent cities in America," Dicks spotted and detained several people based on their underwear.  This included one young Class C offender, who Dicks pulled over with lights flashing.  "Did you hear about the new [low-pants] law?" the chief asked the man, who admitted he had.  "I’m gonna issue [you] a warning," said Dicks.  "I need you to get a belt because it’s indecent exposure," which, under Dicks’ own interpretation, it isn’t.  Chief Dicks then frisked the man.

Yes, he then frisked the man he had stopped for letting the waistband of his underwear show under his pants.  It seems that Dicks, whose name I have somehow avoided making fun of in either of my posts on this issue, asserts that because "sagging" is a crime, it provides probable cause for police to search those who are stopped for sagging.  There is such a thing as a "stop-and-frisk" under Terry v. Ohio, or a "search incident to arrest," but I doubt that either of those justifications would have applied to this stop, which was carried out because a policeman could see someone’s underwear.

Flint may have the third-highest homicide rate in the country, but at least its waistlines are also rising.

Legislation That Comes Back to Bite You