Sources said President Bush was resting comfortably after narrowly escaping injury at a press conference in Baghdad on Sunday night.  The president, on a surprise visit to the Iraqi capital, was surprised to find a shoe being thrown at him by an outraged Iraqi reporter.

The attack came as Bush and Iraqi President Nouri al-Maliki prepared to take questions Sunday night.  "This is the farewell kiss, you dog!" the man shouted, flinging one of his shoes at Bush's head.  The throw was highly accurate and (as the video shows) would likely have clocked Bush right in the forehead had he not dodged with remarkable speed.

No one reacted for a moment or two, which allowed the reporter to throw a second shoe (which thus was technically the actual farewell kiss).  "This is from the widows, the orphans and those who were killed in Iraq," he shouted.  According to the Los Angeles Times, the second shoe was thrown "with similar precision," but it was not quite on target.  Whether Bush recognized that or just was not expecting a second shoe, he did not duck as fully as he had the first time.  But al-Maliki came to the rescue, flinging "his arm in front of Bush's face, his hand outstretched like a baseball player reaching for a line drive." 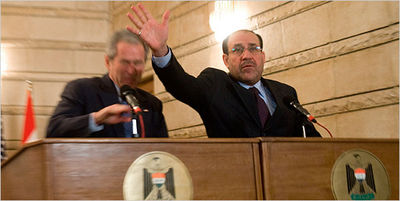 But the shoe again sailed harmlessly over the two presidents.  By this time, security forces were reacting and the man, identified later as Muntather Zaidi, an Iraqi correspondent working for a Cairo satellite TV channel, was quickly wrestled to the ground, removed, and likely beaten severely.

Rumors that a third shoe may have also been thrown from a nearby grassy knoll, which if true would implicate a second assailant and thus a possible conspiracy, were dismissed by White House officials.

Bush also played down the incident, saying, "All I can report is, it is a size ten."  That's a pretty good line, and I give the president credit for that, and for not automatically trying to link the shoe-thrower to al Qaeda.  But it is hard (okay, impossible) to resist remarking that the Bush presidency has increasingly seemed to generate headlines that could come straight out of The Onion.  In recent weeks, The Onion has run small items in which the president has supposedly been, for example, attacked by an alligator or dragged behind his motorcade after his tie got caught in the trunk of a limo.  (The president survives each incident.)  After some double-checking, however, the shoe assault seems to have actually happened.

According to the New York Times report, "[h]itting someone with a shoe is considered the supreme insult in Iraq. It means that the target is even lower than the shoe."

Please Use Caution When Consulting This Map on Kangaroo-Ownership Laws

REMINDER: Choose an Alias That Doesn’t Already Appear on a Warrant