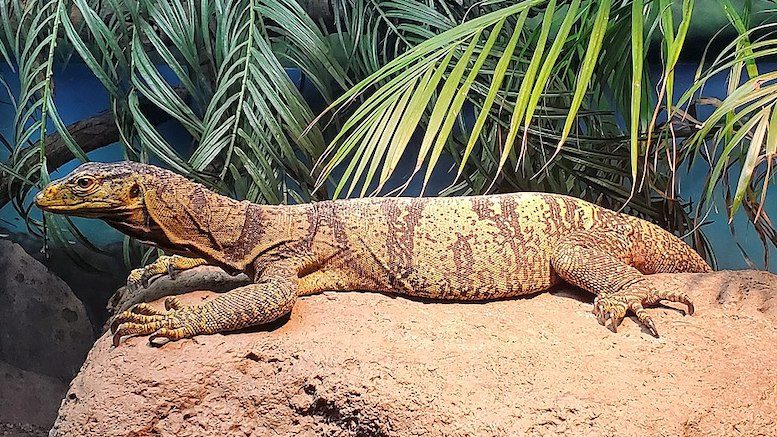 A Butaan lizard, a.k.a. Gray's monitor lizard, the dung of which is valuable to some (image: Porqaz via Wikipedia)

“Its loss left me reeling and altered the course of my life forever,” said Daniel Bennett about the 77 pounds of lizard dung somebody threw out while he was away from his lab.

Bennett, a graduate student at Leeds University in England, is working on a Ph.D. and is studying the rare butaan lizard, a relative of the famous komodo dragon. He has been collecting samples of butaan crap for several years, he said, in order to study the animal’s dietary habits. Bennett said he was devastated by the loss of the research materials, which the university said had been thrown away in error because the large bag of dung was not marked in any way.

Bennett seemed to concede that the scientific importance of the reptile excrement might not have been immediately apparent to others. “To some people it might have been just a bag of lizard shit,” he said, “but to me it represented seven years of painstaking work searching the rainforest with a team of reformed poachers to find the feces of one of the world’s largest, rarest and most mysterious lizards.” Well, his thesis may be screwed, but it sounds like somebody’s got an awesome screenplay in the works.

Was this the largest collection of lizard shit in the world? Bennett was apparently asked.

“Whether it was the largest collection of lizard shit in the world is uncertain,” he said. “But it certainly contained the only dietary sample from that little-known species Varanus olivaceus, and probably the most complete dietary record of any single population of animals in Southeast Asia.” And now that is lost to humanity. Let us drape the world in black, and lament.

The university called the matter “unfortunate,” and has apparently conducted a review of its dung-disposal policies to prevent any future mishaps, just in case anybody else’s thesis may require storing large bags of crap on the premises. “Lessons have been learned and protocols improved,” it said in a statement, “to ensure this cannot happen again.” It has offered Bennett 500 pounds and an apology as compensation, and has stated that his Ph.D. will be awarded on schedule, subject to minor corrections to his thesis unrelated to the lost “materials.”

Bennett, still reeling from his loss, says this is not enough, and that he will “see them in court.” You know, that might not be such a great idea. Given that he will apparently be getting his Ph.D. after all, it is hard to see what his damages would be. What value do you put on the loss of an opportunity to pick oh-so-carefully through 77 pounds of lizard feces? Hard to say.

From the Docket: Attack of the Bulb

And No Warrants Shall Issue, Unless the King Says So