A while back, I saw a report that a bunch of monks had gotten into a brawl in the Church of the Holy Sepulchre in Jerusalem. I was horrified—well, not entirely—at this breach of the peace in one of Christianity’s holiest shrines, believed to be the site of Jesus’ tomb, but it turns out this sort of thing happens fairly often.

The problem is that the place is so holy that everybody wants a piece of it, and there are six Christian denominations—Armenian, Coptic, Ethiopian, Greek Orthodox, Roman Catholic, and Syriac Orthodox—that each claim a legal right to one. All of them guard their pieces with great zeal, so much so that they won’t allow unsupervised walking through their zones, in case that might be seen as weakening their claim.

That’s what led to the monkfight last November. The Armenians decided to have a procession through the Edicule, the structure over the tomb. The Greeks objected to this taking place without one of them being present. The Armenians didn’t want any Greeks around. They tried to march anyway, the Greeks blocked their path, and then this happened: 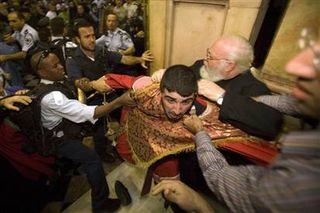 As MSNBC reported, blood was actually drawn in this fight:  “‘We were keeping resistance so that the procession could not pass through … and establish a right that they don’t have,’ said a young Greek Orthodox monk with a cut next to his left eye.” He said he had sustained the wound when an Armenian monk sucker-punched him and broke his glasses. Each side said the other had started it, and a police spokesman said two arrests were made, one from each side.  (I guess this is like “offsetting penalties” in football). The two monks were carted away in handcuffs, as riot police with assault rifles crowded into the Church of the Holy Sepulchre.

Disputes over ownership and jurisdiction at the site go back centuries (further if you count the Crusades, which you probably should). During Ottoman times, control alternated between the Franciscans and the Orthodox, depending on who the Ottomans liked at the time, although according to Wikipedia “outright bribery and violent clashes were not uncommon.” Eventually the Ottomans got sick of it all and officially divided the site. That “status quo” order is still the underlying basis for control today, 250 years later.

While this obviously hasn’t ended the disputes, it does seem to have channeled at least some of them into a quasi-legal context, which may have reduced the rate of violence but has probably increased the ridiculousness of the disputes that do occur. Here is some of the 21st-century nonsense:

Under the status quo agreement, nothing can be done in common areas without consent of all of the communities.  Surprise—doesn’t happen.  One result of this is that even desperately needed maintenance can’t be carried out, so that parts of the structure are in danger of collapsing.  A rooftop monastery needs to be renovated.  The church needs a fire exit—there is only one main door and sometimes thousands of pilgrims inside—but they can’t agree on where it should be. The Edicule itself has been held together by scaffolding since 1947, but nowhere is there less likely to be agreement about rebuilding plans.

Here’s some great visual evidence of just how crazy these feuds are. Sometime prior to 1852, when window ledges were still defined as “common ground,” somebody put a wooden ladder on a ledge over the entrance. The status of ledges subsequently changed, making jurisdiction unclear. So nobody is allowed to move the ladder.  It has been there, in virtually the same position, for over 150 years: 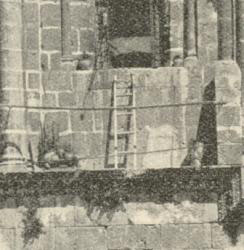 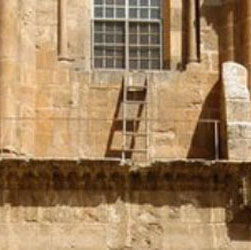 Oh, I forgot to mention that the Muslims are also involved (as well as the Jews, who of course control Jerusalem itself). Two Muslim families have had responsibility for the main entrance since it was assigned to them by Saladin in 1192, after he retook the city from the Crusaders. One family has control of the key, and the other is in charge of the door. Members of the two families meet in the morning and again in the evening. One guy brings the key, and the other actually uses it to lock and unlock the door. Again, this has been going on for over eight hundred years.

So, the next time somebody claims that lawyers are the reason for all the bickering and pointless disputes in the world, you can tell them about the Church of the Holy Sepulchre.