In August, police in Framingham, Massachusetts, responded to a report that a gas station had been robbed.  They brought along a tracking dog and released it in the direction in which witnesses said the robber had gone.  Just a few minutes later, the dog had cornered a man, who the human officers then frisked.  Turned out, though, that this was not the guy who committed the armed robbery, but rather a guy who had just shoplifted $68 worth of meat from a supermarket by stuffing it down his pants.  He apparently admitted the theft, possibly encouraged by Sparky's hungry look.

"The dog must have smelled a tasty dinner in his pants," said a police spokesman, taking the opportunity to utter a sentence he will never be able to use again in his lifetime.

This is an almost perfect example of being in the wrong place at the wrong time.  What are the odds that a police dog will be set on somebody else's trail just as you happen to shuffle out of a nearby supermarket having stolen several pounds of meat?  It seems almost cosmically unfair.

A Fourth Amendment discussion seems difficult to avoid here, maybe almost as difficult as trying to run away from a police dog with your pants full of meat.  The police were looking for someone else, happened across this guy instead, searched him based solely on advice they got from a dog, and arrested him after finding contraband in the course of that search.  Should that evidence be suppressed?  Explain your answer, preferably using a No. 2 pencil, interpretive jazz dance or Native American sand painting.  You have no minutes; you may begin; time's up.

I think the answer is no, but for a reason that surprised me: this wouldn't even be considered a "search" or "seizure" and so the Fourth Amendment doesn't apply.  I would have said the answer to that question was pretty obvious — if a police dog has become very interested in your pants, you've basically been "seized."  But the U.S. Supreme Court has held that using a drug-sniffing dog to smell someone's luggage or the trunk of his car does not even constitute a "search," let alone a "seizure," the rationale being that the dog would only react to evidence of illegal activity and there is no reasonable expectation of privacy for that.  Justice Souter suggested in dissent that this only makes sense if you are willing to assume that police dogs are always (or usually) right, but the majority was fine with that.  (Tip: it doesn't work if a human officer does the sniffing.)  And there appear to be many cases finding that a dog sniff of an individual (in or out of a car) is similarly not a "search."  So, at least assuming McGruff did not physically seize the suspect (see below), then I guess the meat is admissible. 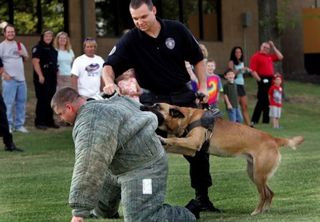 Even if that weren't the law, this might have been okay as a limited search and seizure under Terry v. Ohio.  Under the circumstances, the fact that the dog had cornered somebody probably is enough to provide the necessary "reasonable, articulable suspicion of criminal activity" to justify a frisk.  Of course, the Terry rationale is that the search is justified in order to ensure the officer's safety by checking for weapons.  Since this frisk found steak instead, this might be a tough call.

Of course, if you are sitting there thinking that the dude admitted stealing the meat in the very first paragraph, so that this is all a big waste of time, congratulations.  You get either full credit or no points at all – I haven't decided which.