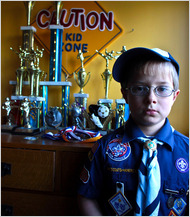 Michael Winston Hicks is the name of a suspicious individual who is on "the list," according to the TSA.

It is also the name of 8-year-old "Mikey" Winston Hicks, left, who according to a January 13 New York Times article is therefore searched virtually every time he goes through airport security, and has been since 2004.

Mikey was frisked for the first time at Newark when he was two years old.

The TSA insists Mikey is not actually one of the 2,500 reportedly on the "no-fly list," and that is apparently true; but that is only one of the many lists the government now has going.  Not that it matters, because none of them do any damn good (so I'm not changing the title of the post), but he is apparently on the "selectee" list of 13,500 people, which is less stupid but not significantly less stupid.  "A terrorist can blow his underwear up and they don't catch him," Mikey's mom was quoted as saying.  "But my 8-year-old can't walk through security without being frisked."

The various lists are perfect examples of "security" measures that make it look like someone is doing something useful, but are easy for bad guys to avoid, while causing enormous hassles for the rest of us.  (I'm sure they are the source of much hilarity whenever terrorists get together.  Just wait till they get a look at the full-body-scanner images once those start getting posted on the Internet.)  The Times article cites another famous example, that of Mario Labbe, a Canadian who started having trouble with security in this country after September 11, frequently experiencing lengthy delays and, for a reason he never figured out, "mysterious questions about Japan."  This went on for almost seven years.  In 2008, he changed his name to "Francois Mario Labbe."  End of problem.  Luckily, a terrorist would never think of using a different name.

As the Times also noted, the TSA's website has a section called "Myth Busters" that lists a series of "myths" about security practices and offers corresponding "busters."  It includes this:

Myth: The "No Fly" List includes an 8 year old boy.

Buster: No 8-year-old is on a TSA watch list.