I guess when you have as many friends in the Middle East as Israel does, you can afford to humiliate one of them.

Turkey, which has been an ally of Israel's for some time, is threatening to recall its ambassador if it does not get a formal apology for how he was treated in a recent meeting with an Israeli deputy foreign minister.  Israel is upset over a Turkish TV series that, among other things, shows Israeli spies kidnapping babies and converting them to Judaism.  Complaining about that is understandable, but how it was done seems remarkably, and comically, childish.  Specifically, the minister summoned the Turkish ambassador to complain about the matter, and made sure he only had a little-bitty sofa to sit on: 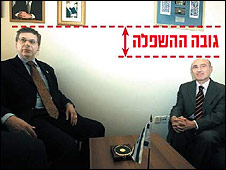 He also invited journalists to the meeting and said he wanted them to make clear that the Israeli officials were "in much higher chairs" than the ambassador.  (The picture above is from an Israeli newspaper that marked the elevation difference and labeled it "the height of humiliation.")  Also, he pointed out that they had taken the little Turkish flag off the table entirely, and that "we are not smiling."  Point made?  In a subsequent interview, the minister said that "in terms of the diplomatic tactics available, this was the minimum that was warranted" given repeated provocations by Turkey.  I guess by giving him a sofa at all they were retaining the ability to escalate if necessary by taking the sofa away next time.

After Turkey complained about the deliberate humiliation of its ambassador, the Israeli minister apologized, saying in the future he would behave "in a diplomatically acceptable manner" and that "disrespect is not my way," although it sort of seems like it is.  Unsatisfied, Turkish President Abdullah Gul demanded a formal apology and said if it did not get one, its ambassador would be recalled and would be on the first plane home tomorrow.  (He'd better fly Turkish Airlines because you know El Al will stick him in coach.)

For future reference, the height of humiliation looks to be maybe eight or nine inches.

It Is No Longer a Crime to Impersonate Smokey Bear