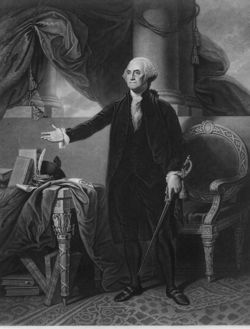 Insisting it is not the same book, but only another copy of the same edition, George Washington's henchmen in Mount Vernon have quietly returned "The Law of Nations," which Washington borrowed in 1789 and never brought back.

As you may recall, the New York Society Library said its ledgers showed Washington had borrowed two books in October 1789, when Congress was still in New York and the NYSL was in the same building.  He was supposed to bring them back the next month, but as it turned out at least one of the books never made it and was about 2,640 months overdue at the time they found the ledgers.

After learning that the jig was up, the staff at Mount Vernon apparently made the NYSL an offer.  They said they would give the library a copy of "The Law of Nations," which, according to them, was not the same book that Washington swiped but "another copy of the same edition," which supposedly they just happened to find lying around.  Probably realizing it was not likely to collect on the many thousands of pence or whatever that the conveniently dead Washington owes in overdue fees, the library decided to pretend it was not the same book, and threw a party on May 19 in honor of the return donation.  So it appears that all is forgiven.

Two other points have also been cleared up, one of which was raised by a reader, and the other one by me in an effort to start a librarian fight.  First, I wrote that Washington (and then-VP John Adams) might have "abused the public trust" by stealing books from the library, but a reader contended that the NYSL is and was a subscription library, not a public library in the sense we use that term now.  Second, I raised the question whether the NYSL was actually the "first Library of Congress," as its website claims, or was just a library that Congress occasionally used back when most of them actually bothered to read books from time to time.  Both those questions were answered by Carolyn, an NYSL librarian who I bothered with an email about them.  She wrote:

Thanks for writing. We have been quite amused by all the sensation from this story – a story that all of us here have known about for quite some time. . . . [Aha! A coverup!]

[I]n truth, Washington was only depriving NYSL subscribers from reading the materials he borrowed and never returned. It would be unfair to say he was “abusing the public trust by stealing the nation’s reading material." . . .

Fine.  I officially apologize to the Washington family for my unfair allegations.  Okay, Adams too.  Carolyn did concede, though, that the NYSL was not the Library of Congress:

So, there you have it.  I guess there might still be a chance to get Ben Franklin's goons worked up about this, but it doesn't seem worth it.