Here's just a partial list of what this election year has offered so far (and it's only mid-October):

The Naked Cowboy, as you probably know, generally hangs out in Times Square playing a guitar while wearing only briefs, boots and a cowboy hat.  He has also appeared here two or three times, once when he sued the company that makes M&Ms (they dressed M&Ms up the same way), and more recently because of a cease-and-desist letter he sent to the Naked Cowgirl.  Last week, he held a press conference (also in Times Square) to announce he had decided to run for president. 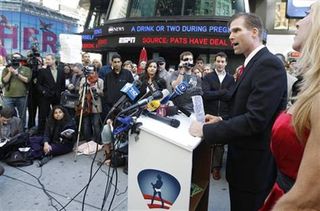 Note the Obama-style logo on the podium.

The Cowboy, also known as Robert Burck, said that he was a member of (can you guess?) the Tea Party movement, and had registered as a Republican in Ohio.  He said he was running "in defense of individual liberty" and supported tax cuts, free markets, immigration reform, and a number of other disappointingly serious-sounding issues.

In what is probably a good move if he hopes to be taken seriously, Burck got a haircut and, thankfully, wore pants for the announcement.

To the Brazilian who apparently thought that by writing about the landslide election victory of an illiterate clown in that country, I was suggesting that the American political process is somehow superior to the one in Brazil, please see above.