In a development that must be raising the spirits of many American candidates, an inexperienced, illiterate clown has won a landslide victory in Brazil’s congressional elections. 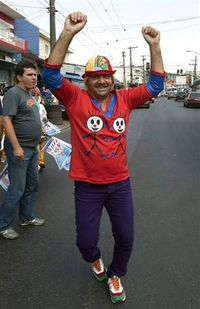 I Yield the Balance of My Time to Rep. Grumpy

Francisco Everardo Oliveira Silva, whose clown name is Tiririca (“Grumpy”), got more than 1.3 million votes, more than twice the number of votes received by his next closest competitor. How did he do it? With complete honesty.

“What does a congressman do?” Grumpy said in campaign ads. “The truth is I don’t know. But vote for me and I’ll [find out and] tell you.” He promised, in fact, to do nothing during his term other than finding out what they do in Congress and telling the voters about it, and voters seemed to think that was a great idea. Or they may have been swayed by Grumpy’s slogan: “It can’t get any worse!”

They certainly did not care that someone probably came up with this slogan for him, or at least wrote it down for him. Grumpy survived a last-minute try by public prosecutors to disqualify him on the grounds of illiteracy, and as noted went on to a landslide victory.

This will very likely turn out to be a boon for other candidates as well, at least those in Grumpy’s coalition. Under Brazilian law, a candidate’s “excess votes” can apparently be passed on to other affiliated candidates, so they will have approximately 650,000 reasons to be glad they had an illiterate clown on the ticket.

Strip Searches Lead to Discovery of Comical String Cite, Among Other Things

Russian Olympic Athlete “Smiling All the Time” After Murder Conviction