Weirdness never takes a holiday, and so neither does Lowering the Bar. Well, every once in a while, but not today.

The Swedish bureau reports that a pair of Santas attacked two guards at the Swedish royal palace in Stockholm early Friday morning (local time). This happened at 1 a.m. GMT, which might make this the first Santa sighting(s) this Christmas Eve.

According to the report, the bad Santas attacked and overpowered the two soldiers on guard duty but then leapt into a waiting car and sped away. They got away with one of the soldiers' weapons, but police were unclear as to whether that was the motive for the attack, or, if not, why the Santas might have turned violent. A spokesman did say that the incident was "extremely unusual."

If only that were true. 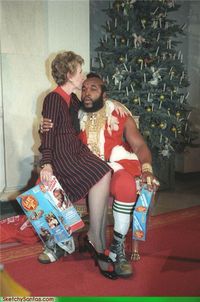 One of Santa's first felonies this season took place on November 29, when an office in Papua New Guinea, of all places, was robbed by Santa Claus and an accomplice. The two allegedly got inside by saying they needed to deliver some presents, but then produced only guns. They escaped with about $20,000. Santa also hit a bank in Jacksonville, Florida, on December 6, but that Santa only had the hat, so maybe he doesn't qualify. On the other hand, the bank is located in the "St. Nicholas" neighborhood in Jacksonville, so maybe he does.

He had the full costume on again when he robbed a bar at the East Providence Yacht Club in Rhode Island on December 18, pulling a rifle or shotgun out of his big red bag. That same day, police in Dayton, Ohio, had to call for backup when a gang of Santas invaded the Dayton Mall "and apparently scared a lot of people there," according to a spokesman. Two female Santas were arrested.

The Ohio incident seems to have been part of Santarchy, the unofficial holiday where Santas gather in various locations around the world for some drunken rioting. See, e.g., "Gang of Drunken Santas Attack Theater," Lowering the Bar (Dec. 23, 2007) (noting witness statement that "[t]hey were all dressed as Santa and shouting 'ho f*cking ho'"). It seems unlikely that today's incident in Sweden is linked to Santarchy, though, as those Santas seem to travel in much larger groups.

Hopefully, the Santa that comes down your chimney this Christmas will be the good one. Happy Holidays.