Here's a great new blog you should check out: Law and the Multiverse, which considers legal scenarios involving superheroes and supervillains.

My favorite so far is probably the post "RICO and the Legion of Doom," in which the authors conclude that the Racketeer Influenced and Corrupt Organizations Act would be the best way to proceed (legally) against teams of bad guys. "RICO is clearly a danger to any traditionally-organized supervillain team," they write." A few successful convictions for kidnapping or robbery by less capable members could lead to racketeering charges and civil suits against the entire membership."

This should work especially well against Batman's opponents, since they seem to have the least capable henchmen around. (I guess now we know what those people did for a living before the TSA was created.) On the other hand, should you really need special tools of any kind to deal with losers like these? 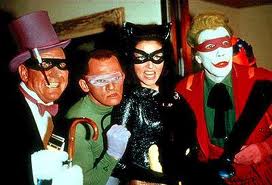 The authors are careful to point out in a disclaimer that they are not providing legal advice and are discussing only hypothetical situations. Given the subject matter, that really should be unnecessary but I guess you can't be too careful.

Some Updates, Which I Guess Have Turned Out to Be Mostly About Randy Quaid