Romanian witches, who are pissed off about a new law that will make it harder for them to avoid paying income tax (what, no tax-evasion spell?), are engaging in some brinksmanship in their struggle with the legislature. A couple of weeks ago they were casting spells involving black pepper and yeast, but according to reports they are now threatening to escalate to “a particularly effective concoction of cat excrement, a dead dog and a chorus of witches.”

A group of witches also threw mandrake root into the Danube River recently, but I guess that was only DEFCON Two.

The new law has reclassified witchcraft, fortune telling, and a few occupations that are not complete bullshit as “professions,” requiring those who practice them to pay income tax and contribute to health-care and pension programs. Having a health-care program might be a good idea for people who are apparently willing to handle cat excrement and dog carcasses, but maybe they are more concerned about creeping socialism.

According to the report, “[m]agic in Romania is no laughing matter,” although that is in no way true. “Centuries-old superstitions are rife and are tolerated even by the Orthodox Church,” which seems a little redundant, but clearly there is a lot going on in Romania that is not at all orthodox. The report noted that candidates and legislators have claimed that poor performance was due to “negative energy” or evil spirits, and that even the president and other top officials wear purple on “important days” and Thursdays, because purple has a “high vibration,” wards off evil attacks and are you kidding me, could you people possibly be any more medieval? 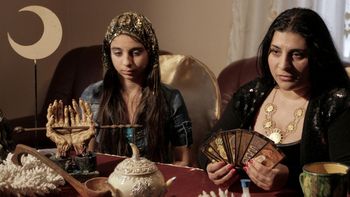 OMG, Mom, you are so embarrassing me! And these hands are, like, totally creeping me out. (Image: AP)

I realize that Americans are by no means immune to this kind of crap, but that is no excuse, Romania.

“My curses always work!” said the witch who threatened to escalate from yeast and mandrake to cat and dog parts. (The report claimed that she “cackled” this “in a smoky voice,” but that makes it sound like they are not really taking this seriously.) “They want to take the country out of this [fiscal] crisis using us?” said Bratara Buzea. “They should get us out of the crisis because they brought us into it.” That first part makes sense, at least, because if your plan to balance the budget includes a witch-taxation bill—well, to tell you the truth, we’ll probably be doing that soon too.

To date I have seen no reports that any of the curses cast so far have had any effect, but maybe that’s because of purple.

Nor Can the Court Order Specific Performance

Nutballs on the California Ballot (or, the Furtwängler Principle)

If Darth Vader Were a Senior Partner

If You Left a Stun Gun on a JetBlue Flight Friday, the TSA Would Like to Speak With You