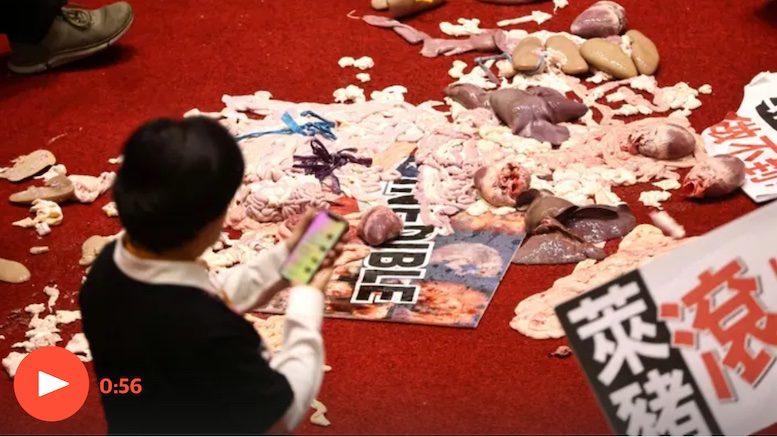 The aftermath (image from video posted by The Guardian)

Alliterating two or three words in a row isn’t hard. Alliterating half a dozen or so might require a thesaurus. Alliterating more than that could be a sign of mental instability, or maybe extreme boredom (maybe both). Anyway, I advise avoiding a lot of alliteration, as it’s arguably addictive.

Let’s stop that and get to the important news, which is that Taiwan’s parliament is at it again. By “it,” I mean they are fighting, and by “fighting,” I mean actual fighting, not the kind of cowardly verbal sniping to which our own legislators have mostly limited themselves for the last 150 years or so. Cf. Joanne B. Freeman, The Field of Blood: Violence in Congress and the Road to the Civil War (2018) (Amazon link). As Freeman’s book explains, really serious legislative violence, like beating someone almost to death or killing another legislator in a duel, is not a good sign because it probably mirrors a more violent trend in the society at large. Lesser skirmishes might also not be a very good sign, but the problem is that I find them hilarious. So I’m going to make light of them anyway.

Actually, I’ve been doing that for some time, and was originally prompted to do so by Taiwan’s parliament—specifically, by this incident, in which a legislator tried to end debate on a controversial bill by grabbing the draft and trying to eat it. I have mentioned that repeatedly, in fact, because I love it. Looks like I mentioned it most recently in 2017, when lawmakers in Taiwan were brawling again, this time over some sort of infrastructure bill. That article also links to previous coverage of skirmishing in the legislative chambers of Turkey, Ukraine, and South Korea, where a committee once locked itself in a conference room to do something or other, only to have somebody try to cut through the door with a chainsaw. I can’t endorse the use of power tools, although it does seem like that might speed up the budget process if used correctly.

Anyway, they were at it again in Taiwan last week, and this time they were flinging entrails.

Luckily, these entrails belonged to pigs, or had once belonged to pigs, not other legislators. It appears that the ruling Democratic Progressive Party recently decided to lift a ban on pork and beef imports from the United States, a move that the opposition fiercely opposes. Then, this happened:

“Physical altercations and protests are not uncommon” in Taiwan’s legislature, The Guardian noted accurately, but it was unclear whether organ-hurling was a new development. A spokesperson for the DPP stated that the KMT’s use of meat products was “disgusting” (which was probably the point) and “a waste of food” (which I guess is also true).

To its credit, The Guardian did not try to alliterate its headline, even in part, but it loses a few points for describing the dispute as an “offal fight.” I of course am above that kind of tripe.

Lawyer Jailed for Contempt Is Freed After 14 Years