On Monday, firefighters had to rescue a woman who got her hand stuck in the money slot of an ATM in Moon Township, Pennsylvania. The woman said the machine had not dispensed the money she asked for, so she went in after it. According to at least one report, she somehow managed to jam her hand inside the machine up to the wrist.

The local fire chief said that they had to use a "special piece of equipment" to free the woman, which makes me wonder whether enough people have been trapped by ATMs in Moon Township that they decided it was worth investing in special equipment for this purpose. The chief did say that they had last used "special tools" to free somebody in December, but that was a toddler who managed to crawl inside a toy machine. I'd have just stuck a quarter in the machine and used the claw to get him out, but I guess that's why I'm not a first responder.

The woman's injuries were said to be minor, which is good but a little puzzling – I admit I haven't actually tried this, but it looks like it would be extremely difficult.

Let's monitor this case until the statute of limitations expires, because it doesn't appear that the machine had an appropriate warning posted. Such as: 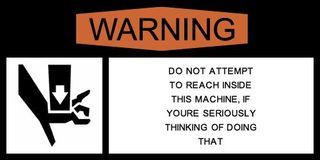 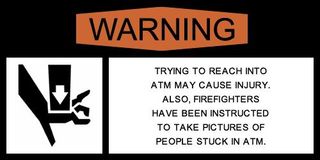 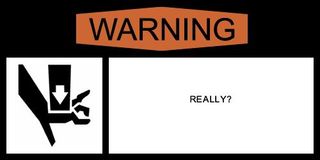 So far I have no record of any similar lawsuit, although there are at least two prior legal disputes involving mail-slot injuries, so it's not out of the question by any means.

Can You Sue Somebody for Forcing You to Go to Law School?