"Can you imagine an 85-year-old lady and a 95-year-old retired Air Force major in wheelchairs being treated like terrorists?" said Omer Petti. I sure can. I can easily imagine that, because this is the United States in 2012 and the TSA is a bunch of useless goddamn thugs who do stuff like this all the time. 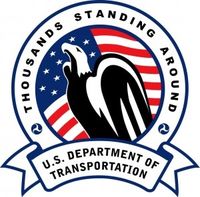 Humor me and pretend this says "Terrorizing Seniors in America."

The Detroit News reported last week that Mr. Petti and his companion, Madge Woodward, were on their way back to Detroit from San Diego on March 29. They arrived 90 minutes early, got in line and put their stuff into the bins. Then Petti says a TSA agent (the report says "security officers," but means TSA agents, who aren't "officers" although they want you to think they are) asked him to remove some stuff from his pocket and send it through the detector. The stuff turned out to be some Kleenex and $300 in cash. Petti was reluctant to put the cash into the bins, but the agent insisted. "You really want me to put my bills in there?" Petti asked. Yes, he did. So Petti complied.

Both he and Ms. Woodward set off the metal detectors. This was not surprising to them, because he has two artificial knees and she has had her hip replaced. And you know, it's bad enough that a couple with a combined age of 180 has to undergo even the simplest of patdowns, but okay, they did set the alarm off. Fine. Then — and here's where it starts to get really stupid — they swabbed the 95-year-old man for explosives. That test came back positive.

Now, this test is anything but foolproof, which is too bad because fools are doing the testing. And according to a security analyst quoted in this article, the test is so sensitive "that alarms can sound for passengers who have recently taken heart pills containing nitroglycerin." He seemed to think this was a good thing, and it would be IF WE WERE LOOKING FOR PASSENGERS WHO HAD RECENTLY TAKEN HEART PILLS CONTAINING NITROGLYCERIN. Since we aren't, the high false-positive rate this suggests means that the test in fact sucks. (There was yet another false positive just the other day in Portland, although with very different results.) But in this case they did land themselves an elderly man who takes heart pills containing nitroglycerin, namely Mr. Petti.

At least the TSA agents in this case had the basic common sense not to further harass this elderly couple, who clearly posed no threat. Just kidding — they took them into separate groping rooms for more searching (Ms. Woodward said she was "touched in every part of my body") while the first guy rummaged through their carry-on bags.

Meanwhile, an actual terrorist probably strolled through the checkpoint in a frightwig while juggling a bunch of grenades, because how the f*ck would they know? They're busy touching an 85-year-old woman.

Finally the couple was released and told to get their belongings, but the TSA still wasn't done with them. The $300 was missing. When Petti asked about it, a senior agent was called who treated them with respect and resolved the situation. Kidding! He asked them to check their pockets, which makes a little sense, and then told them to take their shoes off again, which makes none. When Petti said he was worried they would miss their flight, "he asked me if I was objecting or refusing his request." (They don't like it when you do those things.) He said "No … I would just like to know where my $300 went."

Hm, where could it have gone? I guess we know a terrorist or criminal didn't take it, because none of those people ever get through security. Did the old people maybe put it in their shoes by mistake, because they're old and stupid? No? You looked there? Okay. Possible but unlikely that another passenger took it, because there are cameras all over the place and the bins are under the constant supervision of crack TSA security agents anyway. Well, I guess we're all out of suspects.

Speaking of cameras, the police told Mr. Petti's son that they had reviewed the security tapes but that they were "too blurry" to be of any use. He found this hard to believe, and I'd say something similar if I weren't running dangerously low on sarcasm at this point. Must rest.

The couple made their flight, barely, but Mr. Petti still hasn't gotten his $300 back. A TSA spokesperson said the San Diego unit was investigating. Just give the man his $300 and an apology, TSA, you giant heap of steaming bureaucratic dung.

Fall Is Here . . . A Great Time to Schedule Surveillance

It’s a Series of Tubes!

One Is a Beaver, the Other Is an Alligator