Prof. Jonathan Turley reports that the French city of Angers has demanded restitution for the murder of Edward Plantagenet, the last member of the Plantagenet dynasty that ruled England from 1154 until 1485. The city would like an apology and 513 years’ worth of compensation, but says it would accept the Crown Jewels instead.

This is an entirely legitimate legal claim and not at all an attempt to glom onto Queen Elizabeth’s jubilee for tourism reasons.

What’s the connection between these French people and the English throne? It looks like the first connection that mattered was between Matilda, the daughter of King Henry I, and Geoffrey of Anjou (the county in which Angers was located). Their oldest son became Henry II of England in 1154. After 331 years of exciting adventures, the ruling line ended with Richard III, who was killed in battle by the forces of Henry Tudor (Henry VII). (Since history is written by the victors, Richard III now appears in plays as a murderous hunchback and the Tudors got their own miniseries on Showtime.) 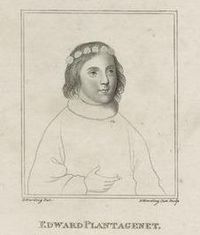 But Angers doesn’t appear to care about any of those guys (especially the hunchback), only about Edward, Earl of Warwick. He had a claim to the throne (he was Richard III’s nephew, or something), but was only 10 in 1485, and judging from this portrait was so poor that he could not even afford to be drawn from the neck down.  But Henry threw him in the Tower of London anyway and kept him there until he was old enough to kill, basically, which happened in 1499. He was the last legitimate male Plantagenet.

Angers is sponsoring a petition drive about this 513-year-old outrage and will send the official results to Queen Elizabeth II (House of Windsor) in September. This will coincidentally coincide with Angers’s annual cultural festival. A spokesperson for the city admitted that the petition “had little chance of success” (the original crown jewels were done away with by Oliver Cromwell anyway), but said that the crime against the Plantagenets was worth remembering. According to the report, he also “encouraged British people to visit Angers, which has medieval buildings including a magnificent castle which recalls the glory days of the Plantagenets.”

Maybe the Queen will invite the people of Angers to come visit the Tower of London to see the crown jewels they can’t have? “We would also be quite pleased to show you the chopping block,” she could say, “although it is only a replica. We have since had the one Eddie saw close up made into a nice ottoman on which we rest Our royal feet from time to time.”

For an even more heroic attempt to ignore the statute of limitations, see Knights Templar v. Pope Benedict XVI, et al., filed in 2008 and bitching about the seizure of plaintiff’s assets by Pope Clement V, a mere 701 years before.