A reader (Prof. Steve Kass) who was intrigued by yesterday's intellectual-property tale did a little research and uncovered some potentially relevant evidence.

First, as you may recall, the plaintiff is seeking a declaratory judgment that it did not infringe on a patent for the "ornamental design of a visor with simulated hair." The complaint mentioned (rather carefully, I thought) that Plaintiff had compared the patent to "products it previously sold but no longer sells," and had decided that those previously sold products did not infringe. Those products do not now appear on Plaintiff's website, but through the wonder (or horror, depending who you ask) of Google's cache, we can still see what they looked like: 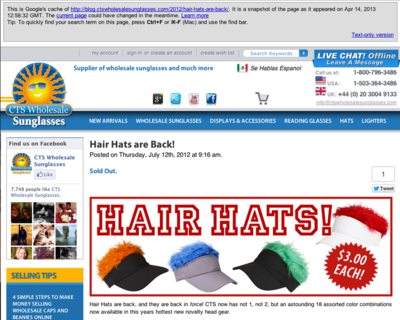 According to Google, that snapshot was taken on April 14, 2013, 13 days before the complaint was filed. Doesn't necessarily mean they were still actually being sold, but there they were.

Here again is the design sketch from the patent, and a closeup of the finished product in use as depicted on the defendant's website:

Did the plaintiff's "Hair Hats" infringe on the defendant's "Flair-Hair Visors"? You be the judge. (If you are in fact the judge, that's just a figure of speech, I'm not trying to tell you what to do.) My first thought was that while they are similar products, Plaintiff's hats seem to have been made only with non-natural (neonish) hair colors, so maybe that made them distinctive. But according to Prof. Burstein, who actually knows something about design-patent law, "Nope. Color isn't claimed in the patent, so any color can infringe." (Now that I think about it, it's not like the hair pictured above is all that "natural" anyway.)

Finally, we learn that it is possible to buy a product that looks very much like the Hair Hat from a supplier in China, and the supplier refers to that product as the "flair hair sun visor": 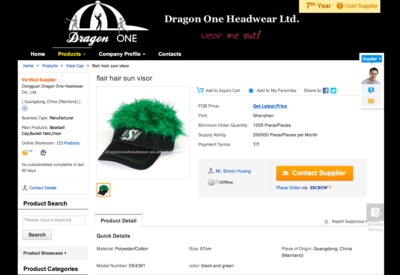 This of course doesn't prove that this is actually where the Hair Hats came from, or that there is any connection whatsoever between this supplier and the plaintiff. The supplier could very well be licensed to produce these things, or (for all I know) could be a hostile infringer ready to flood the United States with up to 200,000 hairy visors per month, which according to its website is the number it could supply.

At that rate, it would still take over 131 years to supply every man, woman, and child in the U.S. with such a thing, so we have some time to consider what our policy should be here. I just didn't want people to freak out.

UPDATE: Least Viable Consent Defense Ever Is Rejected by Jury