This story, which is circulating again this week for some reason, appears to be a re-report of a report from 2011 on the conviction of Anthony Garcia. See, e.g., “Gang tattoo leads to a murder conviction,” Los Angeles Times (Apr. 22, 2011). It was widely reported at that time and I was sure I had reported it too, but if so I can’t find it. My prior failure to report it and the current erroneous re-reporting seem like good enough reasons to report on it now, so here’s the report.

This guy was caught after a detective looking for leads on another case saw his mugshot and realized that the tattoo on his chest was a remarkably accurate depiction of a four-year-old then-unsolved murder. 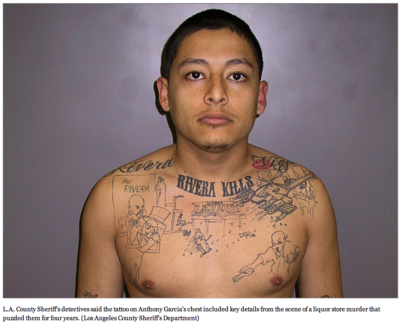 Not long thereafter, the murder was no longer unsolved.

Armed Robber Sues After Being Shot by Armed Victim