Here’s a question for you: Of those involved in the incident below— 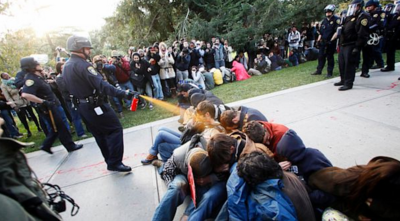 —who would you say should receive more money as a result?

The answer is, of course, number 5, because the correct answer is actually number 2.

The Atlantic (among others) reports that John Pike, the casual chemical warrior shown above, will be getting $38,000 in workers’ compensation payments based on his claim that he was injured on the job. The task that caused his injury was spraying harmless students in the face, and the injury he claims to have suffered is (no, not a sprained finger) depression and anxiety resulting from the public outrage directed at him because he did that.

There is no question that depression, anxiety, and other mental conditions can be legitimate disabilities. One issue with this kind of claim in general, though, is that it can be harder to detect fraudulent claims because the injuries are not obvious (by contrast, you might be able to, for example, get a guy on film running a race in high heels at the same time he’s claiming disability).

Here, according to the Davis Enterprise, an agreed-upon expert testified that Pike is “moderately” disabled due to “continuing and significant internal and external stress with respect to … the significant emotional upheavals that have occurred” in his life since the incident. Again, though, the “incident” was that one time where he sprayed seated protesters in the face with pepper spray, which other humans then saw as a reason to hate him (he is said to have received almost 30,000 angry messages) and which also got him fired. Does his conduct not matter?

I don’t practice employment law, I’m just looking at a book by somebody who does. And workers’ comp is its own specialized area, in which, again, I do not specialize. (If you do, let me know what you think.) Generally speaking, though: workers’ comp is an insurance plan into which employers pay, with the tradeoff being that in most cases workers’ comp is the exclusive remedy for an on-the-job injury. No lawsuits. Because workers don’t have another remedy and the payouts are limited (and defined by law), the rules tend to be interpreted very much in their favor. And so you end up with cases where an employee gets paid despite some very odd facts.

For example, in one case a death benefit was paid despite an objection that the employee was traveling with “a woman, not his wife but registered as such,” and one of them started a fire by careless smoking. The fact that the hotel room was being used “for an immoral and unlawful purpose” (the court also called it “combining his own business with that of his employer”) did not change the fact that the trip itself was made in the course of employment, and so workers’ comp applied.

Okay, that’s immoral business-combining conduct, but what about criminal conduct? Surely a worker can’t get paid if he was injured as a result of a crime he committed! Well, actually….

Employee misconduct, whether negligent, willful, or even criminal, does not necessarily preclude recovery under workers’ compensation law. [Generally], such misconduct will bar recovery only when it constitutes a deviation from the scope of employment…. A distinction must be made between an unauthorized departure from the course of employment [no workers’ comp] and the performance of [an authorized] duty in an unauthorized manner [yes worker’s comp]. The latter conduct, while it may constitute serious and willful misconduct by the employee … does not take the employee outside the course of his employment.

(Emphasis added, cites left out.) Otherwise, the California Supreme Court has said, “[a]ny employer could argue that reckless, intentional, or criminal conduct is not part of any job description and therefore not within the scope of employment. This argument, however, if permitted to succeed, would totally undermine the no-fault foundation of workers’ compensation law.” That is, he’s getting paid because of the somewhat odd no-fault nature of the workers’ comp scheme, not because he was somehow wronged.

The employee’s conduct isn’t irrelevant. Typically, we are probably talking about something like reckless driving, which—even if it results in manslaughter—would have no effect if the driving was in the course of employment. The law does say that if an employee commits “serious and willful misconduct,” any compensation is cut in half (but they still get paid). Payment can be denied only if the employee was injured while committing a felony and has been convicted of that felony. Pike hasn’t been charged with a crime, to my knowledge, although maybe he should have been; and it’s possible that $38,000 is only half of what he would otherwise have gotten. In any event, the (mostly) no-fault workers’ comp scheme is the reason he is getting money at all.

Here are some additional facts that are remarkable.

Yes, the man who assaulted the plaintiffs will be getting $8,000 more than any plaintiff will get, as a result of his claim that he was acting within the course of his employment by assaulting them and became emotionally disabled as a result of being accused of assaulting them; he is also allowed to keep a pension that is likely based to some degree on the $119,000 per year the state was paying him to be the kind of officer who pepper-sprays non-violent protesters in the face.

This Product Contains 100% Something!