…from having to worry about how Judge Linda Bell would rule on his state habeas petition, because she just denied it. So the waiting is over.

Oh, he'll probably die in prison. Sorry, I should have been more clear. Yes, with hindsight, I can see that headline was a little misleading.

Simpson, a former Heisman Trophy winner who was later unfairly prosecuted for two murders actually perpetrated by a Colombian hit squad, or something like that, is currently serving time in a Nevada prison for robbery. See "O.J. Simpson Arrested; Blames Police, J. Edgar Hoover," Lowering the Bar (Sept. 16, 2007) and "Nevada Supreme Court to Pretend to Consider Bail for O.J." (July 21, 2009). His current run for daylight is a habeas claim arguing that his lawyer in the 2007 case, Yale Galanter, was ineffective, had a conflict of interest, committed malpractice, and 19 other arguments that are all probably less convincing than the first three. 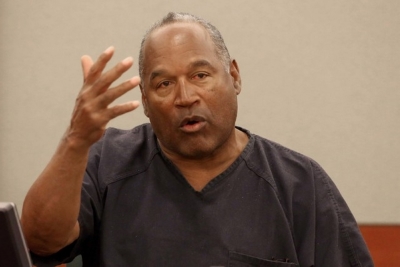 What, no glove this time?
(Photo: Jeff Schied, AP/LVRJ)

They weren't convincing to Judge Bell, at least, who issued a 100-page decision on Tuesday finding that all 22 arguments in the petition "lack merit and consequently are denied." Though there may have been errors at trial, she wrote—and there always are—"[g]iven the overwhelming amount of evidence," none of the errors "cause this court to question the validity of Mr. Simpson's conviction."

At a hearing on the petition in May, the Las Vegas Review-Journal wrote, "Simpson said he began to question Galanter's motivation for representing him following his 2008 conviction and rejected appeal in the Las Vegas robbery." (Just FYI, it is not uncommon for such questions to arise in the mind of a defendant who has lost on appeal.) This report doesn't make clear exactly what Simpson believed the motivation was, but it was supposedly so strong that Galanter didn't care about getting paid:

Simpson testified that Galanter had told him he'd work for free in the case.

Galanter, who won an acquittal for Simpson in a 2001 road rage incident in Florida, denied that.

"No, I don’t do anything for free," he testified.

Galanter reportedly was paid $572,000 to defend Simpson in the case, money I'm guessing came from an insurer, because O.J.'s not supposed to have any. O.J. and Galanter's co-counsel both claim that Galanter pocketed too much of that money, saying he should have spent more of it pursuing various theories such as an intoxication defense. Why didn't he pursue that?

You may be wondering why he can say things like that about a former client—that is, that the client is lying when he claims he was intoxicated, or says he didn't know about plea negotiations, or didn't know his cohorts were armed, and so on (and on). There are exceptions to confidentiality rules that allow disclosure, for example, "to the extent the lawyer reasonably believes [it] necessary … to respond to allegations in any proceeding concerning the lawyer’s representation of the client," which would seem to apply here. Nev. R. Prof. Conduct 1.6(b)(5). Simpson may also have waived any objection by bringing this kind of claim, but either way, testimony on these subjects is allowed.

I was surprised to learn that O.J. was actually granted parole in July, but only on some of the multiple charges on which he was convicted. That decision still leaves him with six sentences that were ordered to run consecutively, meaning that he will remain locked up until at least 2017, further delaying his search for the real killers of Ron and Nicole. The semi-parole was based on evidence that Simpson has so far been a "model inmate" at Lovelock Correctional. As you may recall, rumors in September that he had been caught stealing cookies turned out to be false.