First, The Picture has been released to the media: 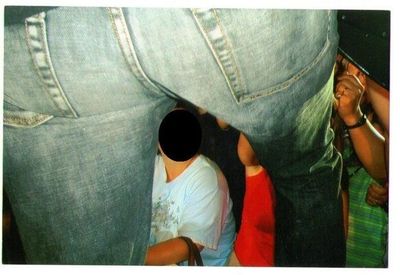 To be specific, this is the picture the plaintiff claims she took just before impact.

During his testimony last week, Springfield did tentatively identify the buttocks as his. (The identity of the fan just below the buttocks in question has been obscured for her protection.)

Second, the plaintiff's lawyer wrote a letter to the Syracuse Post-Standard responding to comments posted on the paper's website, comments that were overwhelmingly anti-his-client. "[M]y intention is not to persuade you to change your initial impressions, as I understand that first impressions are made only once," he wrote. "Rather, my intention is to present you with the facts … in hopes of demonstrating that those of you who 'rushed to judgment' without knowing the facts may have done so prematurely." Is there another way to rush to judgment? And if he doesn't want to change those people's initial impressions, why is he writing this letter?

Anyway, the only detail he provides that wasn't in the earlier coverage, I think, is that Springfield allegedly testified that he generally goes into the seating area before a concert to make sure the seating is stable and dry, because he plans to go out there during the show. But he did not do that before the 2004 show, even though the afternoon show had been rained out. "Stated differently," the lawyer wrote, "Mr. Springfield knowingly ventured into the audience under conditions he knew posed a potential threat of harm."

Okay, but the plaintiff isn't claiming he went out there with a hunk of plutonium, just his buttocks (and maybe a guitar). And the lawyer's explanation still seems a little thin when it comes to explaining the plaintiff's injury. Springfield allegedly fell onto the plaintiff or struck her with his butt, knocking her down and causing her to hit her head hard enough to sustain a concussion. That's certainly possible, but it is odd that plaintiff showed no signs of injury at the time. Originally she claimed she had been knocked "unconscious," but if she was, nobody else noticed it. Her lawyer now explains that she actually meant "disoriented," but those seem like two entirely different things.

Italy Actually Going Through With Manslaughter Trial of Seismologists

Why We Wait For All Cameras to Leave the Room