When was the last time you saw somebody do that?

This time I did it as part of a "Legalese It" segment on Huffington Post Live, hosted by Mike Sacks. Also talking were Jessica Mederson, who writes E-Discovery Matters and Elie Mystal of Above the Law. We talked about:

Well, I talked about the Buggery Act of 1533—it's mentioned in the Indian court's ruling, so, relevant!—until I noticed nobody else was really chiming in on that one. Hey, if you just wrote a book on weird laws, you would focus on that sort of thing too. Maybe. 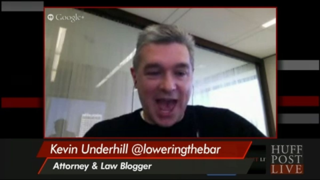 The Most Flattering Screenshot Ever
(Photo: Scott Horst)

I don't think I was talking about that Act (note capital letter) at the time of the screenshot, but could be wrong. It did make me happy.

Speaking of the book, which I somehow did not remember to plug while on the air, there has been a delay that is apparently the fault of the printers. I am told that they are busily cranking it out right now (hopefully "cranking" is just a figure of speech) and that it will be in the warehouses and thus shipping by the middle of next week. That will still get it to you before Christmas Eve with regular UPS shipping. It will be on Amazon and other sites of that kind (including internationally) starting in January, so there is also that. Thanks again for your interest in this thing.

Iraqi Shoe-Thrower to Get Early Release