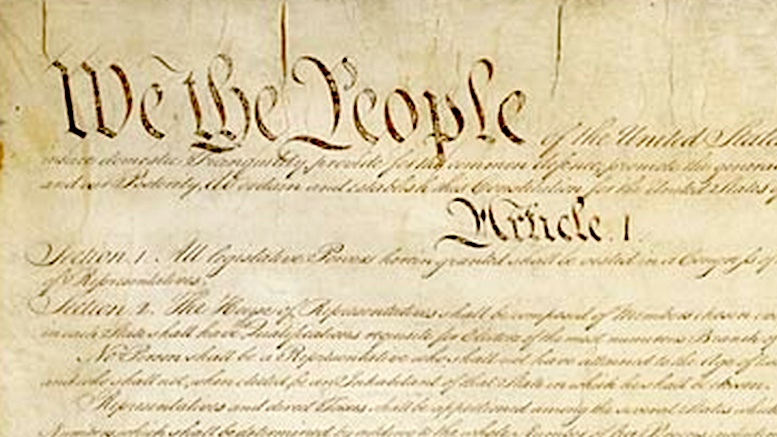 In response to my post about the freakishly long oath of office that Massachusetts once required (see “Shortening the Massachusetts Oath of Office Probably Saved Lives” (Apr. 17), somebody wrote to say it was remarkable that for 40 years Massachusetts had an oath that was obviously unconstitutional. He was referring to the first sentence, which required any high-level official to swear that “I believe the Christian religion, and have a firm persuasion of its truth,” and so plainly violated the First Amendment’s Establishment Clause until the oath was amended in 1821.

Probably because I was focused on the less important issue (to some) of the number of words involved, I just sort of skipped over this. On reflection it seems worth mentioning, because it may be surprising to learn that at the time, and for many years after, this requirement was totally legal.

It didn’t violate the First Amendment initially for the simple reason that the First Amendment didn’t yet exist. The states started drafting new constitutions not long after the Declaration of Independence, and the Massachusetts Constitution was approved in 1780. This was before even the Articles of Confederation were ratified (1781), let alone the U.S. Constitution (1789), which was drafted in response to the general recognition that the Articles of Confederation sucked. They said nothing about freedom of religion in any event, so from 1780 to 1789, there was no federal document that would have precluded a state from having such an oath.

But that was still true after the Constitution was ratified. There was no Bill of Rights and so no First Amendment until 1791. The Constitution itself did provide, in Article VI, that “no religious test shall ever be required as a qualification to any office or public trust under the United States,” but “the United States” meant the federal government, not the individual states. And the First Amendment also did not apply to the states—it said (and still says) only that “Congress shall make no law” about religion. The states could do what they wanted.

And they did. Nine of the original 13 states, in fact, had some sort of religious test in their constitutions and continued to have them for many years. It looks like Pennsylvania, Maryland, and Massachusetts were the most tolerant of the nine, requiring only that officeholders had to be Christian (or willing to swear that they were, anyway). In the others, every religion was tolerated, as long as it was Protestant. For example, in South Carolina:

This was just slightly in conflict with the lofty stuff they were also saying about freedom (though less conflicting than, you know, slavery). But some people have always had difficulty seeing such conflicts, sometimes even within the same sentence:

That there shall be no establishment of any one religious sect in this Province, in preference to another; and that no Protestant inhabitant of this Colony shall be denied the enjoyment of any civil right, merely on account of his religious principles; but that all persons, professing a belief in the faith of any Protestant sect … shall fully and freely enjoy every privilege and immunity, enjoyed by others their fellow subjects.

N.J. Const. of 1776, Art. XIX. It’s total religious freedom, you see, for those who observe the correct religion.

For its part, Massachusetts tolerated all religions, as long as they were Christian, and even made accommodations for the Quakers, who were specifically allowed to hold office even though they don’t swear oaths. (They still had to make the basic statement, they just didn’t have to use words like “swear” or “so help me God.”) The part about Christianity lasted until 1821, when the oath was changed to require “true faith and allegiance” only to Massachusetts and its constitution.

But again, that had nothing to do with the U.S. Constitution, because the Bill of Rights originally applied only to the federal government, something the U.S. Supreme Court confirmed in Barron v. Baltimore (1833). This didn’t change until after the Civil War, when the 14th Amendment (and a few hundred thousand Union soldiers) put some restrictions on the states. Even then, the Court held in 1876 that the First Amendment did not apply to the states, and it wasn’t until the 1940s that it changed its collective mind about the Establishment and Free Exercise Clauses, deciding that they applied to the states via the Due Process Clause of the 14th Amendment, and not until 1961 that it held this meant state religious tests were necessarily unconstitutional.

So, to Massachusetts’s credit, it got rid of the religious test 140 years before the U.S. Supreme Court required it. To the shame of Arkansas, Maryland, Mississippi, North Carolina, Pennsylvania, South Carolina, Tennessee, and Texas, they still haven’t gotten rid of theirs entirely (even though it’s very unlikely the requirement could be enforced).

Quakers still probably have nothing to worry about, at least. One1 has even been elected President—although this article says that his Quaker background was part of his “first cover-up.” One suspects, though, that he was not all that committed to his faith, based on my understanding that Quakers also tend to frown on things like, let’s say, bombing the crap out of Cambodia.

1 Correction: two. Herbert Hoover was also a Quaker, and although it’s not entirely clear how observant he was, I can’t find any evidence he dropped a single bomb on Cambodia.